Dec 8. South Korea has announced the extension of its air defense zone (to take effect Dec. 15).  The new zone overlaps the zones claimed by Japan and China.

In the East China Sea a dispute arose Nov. 23 when China announced new borders for its air defense zone, and warned that all aircraft entering this space must notify the Chinese authorities in advance, and that China’s air force would be on high alert to firmly protect its airspace.

This warning was directed particularly at Japan, who has held an air zone which is overlapped by China’s recent claim.  This zone was decided by the victors of WWII, and is protected by America through the Japanese-American Treaty of Mutual Protection.  The new Chinese zone also claims a submerged rock and research station belonging to South Korea.

The Senkaku Islands were annexed by Japan in 1895, before which no country had pronounced any claim over them.  America occupied them for a period after the 1945 Japanese surrender.  The islands have been used for ecological surveys and US military bombing sites since the 1940’s, when the last residents stopped fishing there.  The islands were privately owned by Japanese entrepreneurs since 1900 and rented by the Japanese government until 2012 when the Japanese government bought the islands. 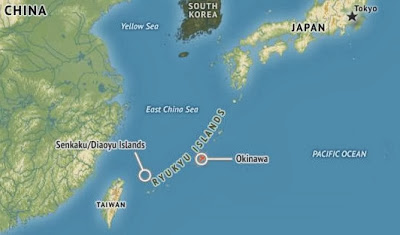 Taiwan and China have claimed the islands since 1971.  China and Taiwan claim ownership from 1534 and claim that the islands, though signed over to Japan in the first Sino-Japanese war, should return to China because after WWII Japan released certain of its territories.  Japan rejects both claims.

No details specific to these islands are contained in the treaties wherein Japan gained or ceded control of her empire.  What is stated in both the 1895 and the 1951 treaties is that Japan gains and then relinquishes Formosa and “all islands appertaining to or belong to Formosa.”

America administered the area from WWII to 1972, when it returned ownership to Japan.  The US does not have an official position on the competing claims.  However, the Treaty of Mutual Cooperation and Security between the US and Japan binds America to protect these islands (confirmed by US government officials 2004, 2010, and 2012, when the US senate amended the National Defense act for 2013 to specifically cover the Senkakus as protected Japanese territory).  The US government has also mentioned the Senkakus specifically since the discovery of nearby oil reserves in 1969 and since the Taiwanese and Chinese contentions in 1971.  Before that time, the Senkakus were not mentioned; only the Ryukyu island chain was mentioned as Japanese territory.

Recent years have seen protests and clashes between Chinese and Japanese boats and in some cases air craft.

Nov. 23 after announcing their claim, China sent an air force mission to patrol the area.  Japanese commercial flights were ordered to disregard the Chinese warnings.  Nov. 26 America, who declared the airspace international, flew two unarmed B-52s through it.  The US military stated that they would continue to do so and without identifying themselves.  South Korea and Japan have also sent military aircraft to the area.  Commercial airlines have been using the area uninterruptedly since China’s warnings.  America, Japan, and South Korea have protested China’s statement claiming new airspace.

South Korea possesses the submerged rock called Ieodo, upon which rests a South Korean research station.  The rock is also claimed by China.  The South Korean air defense zone was established by the US during the Korean War.  The US, Japan and China have agreed that the expansion of the South Korean air zone is in line with international law.

Many commentators note the importance of the islands as oil and gas reserves.  In 2009 the US sanctioned Iranian oil and gas.  Japan had been importing oil from Iran until then (so had China, which bypassed US sanctions).  Some commentators point to the economic gains that come from military expansion as a motivation for increasing tensions in the area.