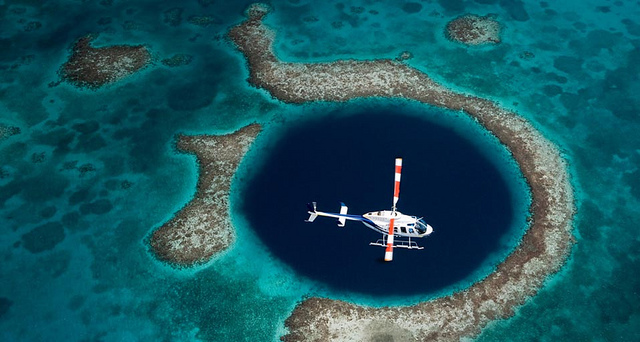 In an effort to understand why the Mayan civilization of Central America met its sudden demise, a new study at the underwater caves of the Great Blue Hole, located some 40 miles off the coast of Belize, has revealed that minerals found at the site indicate an extreme drought in the region between 800 and 900 AD, which may have forced the Mayans to adapt and relocate, reducing the plush region to deserted ruins.

A civilization that thrived for over 2,000 years across the area of modern-day southern Mexico, Belize, Honduras, El Salvador, and Guatemala, the Mayans are known to have been skilled astronomers, architects, masons, artists and mathematicians, chroniclers–as well as for creating calendar system and making doomsday predictions still referenced today. What spurred the team to investigate the lost civilization was the abrupt end of the once-thriving civilization, which continues to be widely referenced based on its pottery, artifacts and monolithic structures, as well as the desolate and ruined cities it left behind.

Andre Droxler from Rice University found that the mineral deposits in the caves of a 1,000-foot crater correlated with the period of the civilization’s demise.

Droxler’s team took core sediment samples and measured the ratio of titanium to aluminium. It is known that heavy rainfall deposit titanium from volcanic rocks into the Atlantic Ocean–ergo the Great Blue Hole. Over time, the deposits turn the crater into a “sediment trap”–a big bucket of titanium–leaving less titanium in the soil during dryer seasons.

With this information, Droxler compared the titanium levels in the soil to sediments dating to the Mayan era and found them to be significantly low. Live Science puts it in technical terms saying, “The team found that during the period between A.D. 800 and A.D. 1000, when the Mayan civilization collapsed, there were just one or two tropical cyclones every two decades, as opposed to the usual five or six.”

Although they wreak havoc, these cyclones were the only way the thirsty civilization was able to survive in the absence of a body of drinkable water. Besides water, the cyclones also redistribute titanium and other minerals to replenish the land of any minerals essential to make it inhabitable. The evidence recently observed corroborates a 2012 study published in Journal Science. A stalagmite from the caves in Belize dating to the Mayan era was analyzed and the observations are consistent with a sharp decrease in rainfall coinciding with the declining period of the Mayan culture.