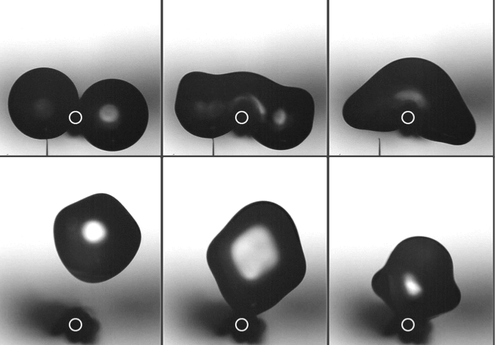 A Duke University team has created fibers that cause liquid to jump off their surface as it accumulates, leading to new possibilities in water purification, atmospheric moisture harvesting, and various drop collecting industrial material applications.

“Self-removal is essentially inevitable as long as the surface is reasonably hydrophobic,” said Chuan-Hua Chen of Duke University in Durham, North Carolina, a lead researcher of the study. High degrees of hydrophobia are not necessary to create self-removing droplets. Self-removal is based largely on a small surface area for liquid to bead upon.

Liquids jump off the fibers as they accumulated due to the composition and width of the fibers. So long as merged droplets are above a certain size, when they coalesce into almost-spheres to reduce surface area, some of the energy released turns into mechanical energy sufficient to detach the bead and propel it away from the surface.

The speed at which a droplet launches from a surface is based on the degree to which the ratio radius of the droplet trying to reduce contact with the surface exceeds the critical value of attachment to the surface.

It is the first time self-removing droplets have been demonstrated on curved surface such as fibers, and the team believes the technology should be applicable to emulsions so long as the emulsion is not too vicious.

ADDIS ABABA – The Ethiopian government has given permission to seven international media outlets, including the BBC, Reuters and Al Jazeera, to report on the situation in Tigray.

The government said in a statement that it was concerned about the baseless and politically motivated information being spread about the situation in Tigray State.

Additionally, of the 135 international organizations that have applied for humanitarian assistance in the region, 29 are said to be already operating there.

Meanwhile, the Ethiopian Electric Power Corporation (EEPC) announced that the power supply that was cut off was due to the attack on the main power transmission line in Tigray State and has since been restored. Electricity has been cut off across the region for more than a week.

According to the government, electricity was cut off by TPLF militants during an attack on a high-voltage transmission line from Alamata-Mehoni-Mekele in the area known as Adigudom.

EEPC announced that power supply repairs were successfully completed in days following the power outage in the region.

OSHODI, Nigeria – Police have rescued 81-year-old monarch Muri Bassey Iyamba from the kidnappers den where he was being held. Iyamba was whisked away from his house on Monday night, and with the intervention of police and some community youths he was rescued around 4 a.m. the next morning.

According to a family source in Kano, who spoke on the condition of anonymity, the hoodlums arrived in the town around 1 a.m. and went straight to the matrimonial home of Hajiya Rabi, where she was whisked away to an unknown destination.

US Evangelicals raise alarm about “Radicalized Christian Nationalism” in their midst, call for opposition in wake of the Jan 6 insurrection

More than 100 pastors, ministry and seminary leaders, and other prominent American evangelicals have penned an open letter calling on other Christians to take a public stand: “We recognize that evangelicalism, and white evangelicalism in particular, has been susceptible to the heresy of Christian nationalism because of a long history of faith leaders accommodating white supremacy. We choose to speak out now because we do not want to be quiet accomplices in this ongoing sin.”

Quoting Jesus Christ, the letter says, “No Christian can defend the un-Christlike behavior of those who committed the violence on January 6. Not only was it anti-democratic, but it was also anti-Christian,” urging other evangelical leaders “to boldly make it clear that a commitment to Jesus Christ is incompatible with calls to violence, support of white Christian nationalism, conspiracy theories, and all religious and racial prejudice.”

The progressive evangelical group VoteCommonGood is behind the action.

Commodity demand growth will go up, due to low-income households and green energy – Goldman Sachs