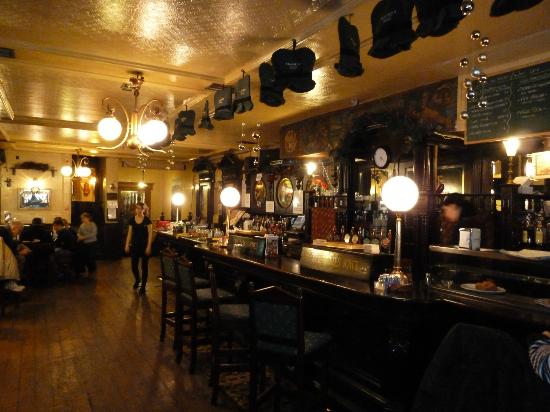 And why a good bar is special

One of the national newspapers in Ireland hosts a blog called Generation Emigration and it reveals insights into the whos, whats, hows, and whys of the people who choose to leave Ireland. There are those who wish to return and those that don’t, those that miss it and those you are happy in a new life in a foreign land. As we approach St. Patrick’s Day, I would like to nominate an Irish bar that, for me, represents the best and the real of Ireland.

The James Joyce bar on Calle Alcala is the best Irish pub in Madrid. Indeed, it is the only true Irish bar in the Spanish capital and I could wax lyrical about it for hours but I shall do my best to contain my love for it within the limits of these pages. It is distinctly Irish because it is the only Irish bar in town that is owned by an Irish man and actually has Irish people behind the bar. I am sure they are only months away from being able to issue and reissue passports for Irish citizens in the wood lined and artistically hued walls and bar tops of this Irish watering hole.

Any reader of Joyce — or anyone who has pretended to read Joyce — will know that the dispensers of spirits were dubbed with the name of the people who dispense the Holy Spirit. Thus bar tenders were curates or seminarians if they were assistants in the bar.  The picture of Joyce dominates a wall in the bar there in much the same those round spectacles dominated his face and the visages of other great writers of note are noticeable between the vicissitudes of the indecently sober and the inarticulately inebriated. This is because the bar sits on the site of an old Spanish bar that was famous as being a meeting point for different Spanish writers, such as Benito Galdos. A cafe not too far away bears his name. On this point, too, the bar represents Joyce and an innate facet of being Irish: celebrating one’s Irishness while also being influenced by the outside.

The spiritual needs of an Irish person abroad can be met here because it is the only bar in the city that is adorned with the flags of the 32 counties and it broadcasts GAA matches of hurling and Gaelic football. It is possible to learn Irish, or Gaeilge, and the Irish Business Network meet in the pub quite regularly. Other bars are staffed by Russians or display pictures of the English cricket team, much to the chagrin of many an Irish person who has to live with an identity that many do not understand.

A twee statue of St. Patrick is rolled out on St. Patrick’s Day but a little bit of vice is alright; we’ve always been able to indulge our stereotype side and live up to the expectations we sometimes put on ourselves as much as others put on us. The descriptions of other bars in the blog speak of knowing nods and the craic of an Irish bar and the James Joyce exhibits the same qualities but, what is more, it is a hub where high-flying Irish business people, Spanish dance troupes that do Irish dancing, and lowly teachers can intermingle with each other and the world in the name of self-improvement, for home, for the horizons inside and out. If that sounds trite, I’m just deliriously happy that the bar hasn’t been discovered by stag parties. Probably because the pub is just outside the centre… that’s the luck of this Irish bar.

In the words of Flann O’Brien, a writer who also watches from the walls:

When things go wrong and will not come right,

Though you do the best you can,

When life looks black as the hour of night –

A pint of plain is your only man

Wise words for a group of people seeking succour and solace when the burden of being away from home becomes too much. That is the real value of a real Irish pub.