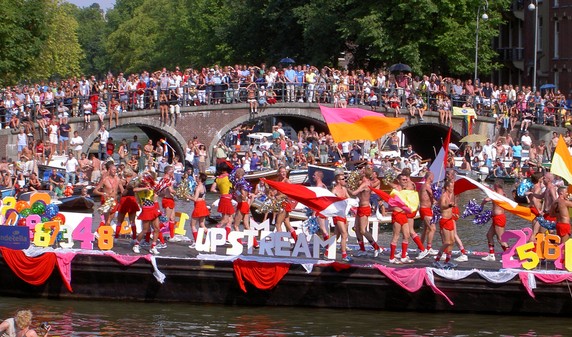 AMSTERDAM — This week rainbows and glitter decorated the streets of Amsterdam, commemorating the 2015 Gay Pride festival. Over 350,000 people swarmed the streets to celebrate the right to be openly gay in the iconic liberal city. The party-goers were from all walks of life, including flamboyantly dressed drag queens, openly gay couples, and straight tourists looking to be a part of the spectacle. Even the sun showed up, bringing temperatures up to 28°C.

The festival was officially on all week, but the real party began on Friday. It all kicked off with ‘The Drag Olympics,’ where you could find the fabulous contestants in their extravagantly fashioned drag costumes. The games began with a cat walk, where the girls could strut their stuff on the stage in front of a 400-strong applauding audience. The show continued with a few of the more provocative contestants performing and lip-syncing a song of their choice.

Followed by the final contest and inarguably the most entertaining; ‘the twerk off.’ The rowdy crowd were amused to watch the contestants get viciously competitive on stage between each other, doing their best twerking along to the thumping music, while blatantly trying to shove each other off stage whenever they got the chance.

However, all of the catty behaviour was amended with a final dance as the audience joined in commending the winners of each competition.

Saturday’s canal parade is what made Amsterdam’s Gay Pride festival unique. The lavishly decorated boats of all sizes and shapes cruised by, as the on looking admirers enjoyed wine and cheese platters along the edge of the canals. Queen and many more gay anthems filled the atmosphere, as people danced and even dived into the water, cooling off under the hot summer sun. Smiles gleamed everywhere as the gay and straight all enjoyed the amazing day together. However, it wasn’t all butterflies and cupcakes, as some intoxicated sailors forgot to duck as the boats drove under the bridges and men over board became frequent. Pandemonium arose as boats began to bounce off each other when order was lost. To the on-lookers amusement, it was quite the spectacle. Though it wasn’t long before the police were on the water and the parade eventually resumed.

The narrow streets surrounding the red-light district are where the party was all going off in the evening. It was so densely packed with people, and although walking became an arduous task, everyone embraced the chaos and the atmosphere remained positively wild, enjoying live music, alcohol and drugs that Amsterdam is renowned for.

The upbeat music pumped late through the night, as stumbling half-dressed men and woman partied on the streets of Amsterdam, but eventually deserted the street at the early hours of the morning.

When the sun rose, the empty streets were littered with colourful decorations, clothes and rubbish. The city was lifeless, other than the poor street cleaners who certainly had a strenuous task ahead of them.

At the end of the day, the 2015 Gay Pride Festival was a huge success, and the evidence was upon the thousands of gratified yet hung over faces.