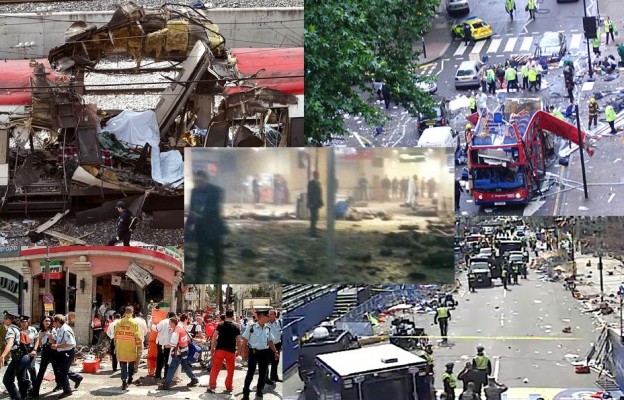 In the previous 10 years only 12 days have passed without an Islamist terrorist attack, according to terrorist watch group TheReligionofPeace.com (TROP), which has kept a record of all such attacks since Sept. 11, 2001. According to their records, an average of five people are killed each day by Muslims motivated by what the editors of TROP identify as “duty to their religion.”

Islam is unique among the world’s prevailing religions, the group states, in that killing is widespread and relatively continuous. TROP editor Glen Roberts thinks this has to do with the scripture and history of the religion.

“Kill in the name of Jesus–as some crackpot somewhere seems to do once every decade or so–and no one can argue that this is the example of Christ,” Roberts told us. “This is not the case with Muhammad, who ordered numerous military campaigns against non-believers and had people put to death for mocking him or resisting his claim to being a prophet.

“The people who know Muhammad best–his companions–were extremely prolific in waging war against non-threatening populations under the rationale that Islam is meant to be supreme. There is nothing in the Quran that discourages this. In fact, verse 9:29 says that Christians and Jews are to be killed if they resist subjugation. Verse 9:123 tells Muslims to ‘fight those of the unbelievers who are near to you and let them find in you hardness.'”

TROP has kept track of incidents of Islamist violence since Sept. 11, 2001, and the organization distinguishes four features of attacks: Jihad attacks, Allah Akbars (suicide attacks), Dead Bodies, and Critically Injured. The numbers do not include ordinary incidents of violence among nominal Muslims–only killings judged by TROP editors to be motivated by religious duty.

Each month there are hundreds of separate attacks in dozens of different countries. For example, in December, 2014 there were 233 Jihad attacks in 30 countries, including 33 Allah Akbars, resulting in 2,497 dead bodies and over 2,000 injured.

Roberts offered some thoughts on the comparison of Islam to other religions, such as Christianity and Buddhism–within and from which there has also been terrorist violence.

“Everyone knows that there are peaceful and tolerant members of every religion,” stated Roberts. “The question is whether or not the peace and tolerance is a byproduct of the religion.

“In Christianity, morality generally springs from the New Testament,” Roberts told us. “The peace and tolerance is so pervasive that many Christians probably find themselves having to explain away the pacifist nature of the text in order to rationalize more pragmatic views on self-defense.

“In Islam it is exactly the opposite. Muslims who hold tolerant views or a Judeo-Christian ethic have to begin with their preferred moral context and then make the Quran subordinate to it. In other words they have to ignore what the Quran actually says–and what Muhammad really did–and imagine that it supports what they already believe to be true.”

“A person who abandons themselves to the true teachings of Muhammad is going to be bigoted toward those outside the faith. They are also going to believe that violence is sanctioned for the cause of Allah. This is something that we call ‘radicalization’ in order to avoid the uncomfortable truth that it is really just true Islam.”

TROP’s number of Islamist terror attacks since September 11 sits just under 25,000 at the time of writing, although this number is expected by the group to be significantly lower than the actual number because it does not include incidents not reported by media.