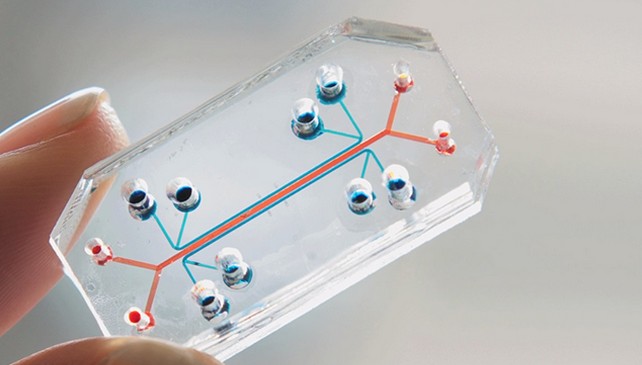 Animal rights activists will welcome this news with enthusiasm: the Wyss Institute at Harvard University has developed a chip that could save the lives of millions of laboratory animals. The chip would imitate the operation of complete organs and thus predict more effectively the effects of treatment on humans.

Animal experimentation is subject to much debate on the bases of both ethics and quality. Indeed, the results are rarely transferable to humans and therefore become merely the objects of a further set of tests. These experiments often create much unnecessary suffering by animals bred or kept in laboratories.

“For every dollar spent, we are getting less and less medication on the market,” Geraldine Hamilton, scientist at the Wyss Institute, commented on the current state of animal research affairs.

With the new smart chip, it could be that this waste (financial and in terms of animal lives) becomes a memory.

About the size of a coin, the new chip is composed of the cells of different organs (kidney, stomach, liver) related by small channels acting as blood vessels. In these channels, a nutritional liquid replacing blood is propelled by small pumps, reproducing the actual flow of the heart. It is an electro-organism copying reality very closely, and can therefore be used to test various substances for how they would effect the human body.

The system is not fixed, so scientists can integrate different types of cells according to the research.

The molecule to be tested is introduced into the system as if it were introduced into a body. For now, cell samples used for the first tests belong to men and women of different ethnic groups.

This new system has not yet been used in the development of any new drugs and is still in the control stage.

The research team has been distinguished by the awarding of an Animal Safety Research Prize, which recognizes innovations offering alternatives to animal testing.

In this “win-win” approach to fighting against animal and human suffering, the two are no longer opposed –they are parallel.