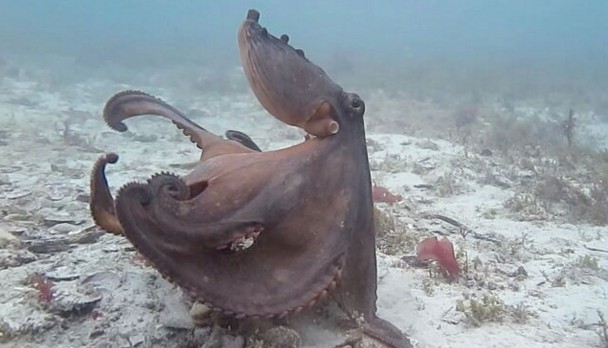 A recent study of octopuses off the coast of Australia has discovered that — despite usually being considered a solitary animal — octopuses have a social life, and part of that social life involves physical displays of toughness.

When octopuses meet each other in agonistic interactions, they exhibit certain types of behavior, researchers at the Alaska Pacific University found.

“We found that octopuses are using body patterns and postures to signal to each other during disputes,” said David Scheel of Alaska Pacific University.

“The postures and patterns can be quite flashy, such as standing very tall, raising the body mantle high above the eyes, and turning very dark.”

The impetus for the research came from a member of an online cephalopod community noting something he’d seen octopuses doing that he thought was interesting. The researchers took it from there, watching 186 interactions between Octopus tetricus — a species that lives in Jervis Bay, Australia — which furnished them with 500 interactions.

The agonistic behavior was what they noticed primarily.

When both octopuses turned black, it was more likely they would engage in physical violence to settle the question of dominance, but when one turned black and the other was a pale color, the pale colored octopus more often retreated while the black octopus held the field.

The report, “Signal Use by Octopuses in Agonistic Interactions,” was completed by Drs. David Scheel, Peter Godfrey-Smith and Matthew Lawrence, and was published in the journal Current Biology.