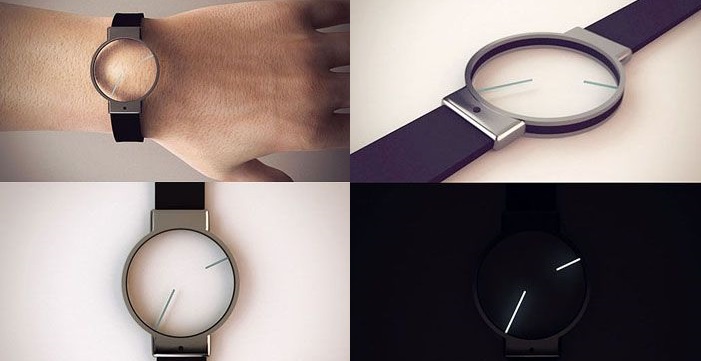 This is the ASIG nohero/nosky Concentric D. wrist watch, a concept for CD2 that was designed by Row Zero aka Simon Williamson, an associate professor at Wentworth Institute of Technology in Boston, Massachusetts, which redesigns not just the surface but also the case of the watch.

Instead of a motor of gears rotating the arms of the watch from its center, the ASIG Concentric D. powers itself from the border of the watch face, leaving the face empty and transparent.

The arms radiate inward rather than outward, and must run along three tracks on the inside of the watch face border.

The ASIG Concentric D. concept also maintains the traditional feature of the watch winder, whether the winder is used to tension springs within the border of the face or is just for show is not known.

The watch hands are decorated with rows of tiny lights for night wear.

The ASIG Concentric D. has garnered a significant amount of attention based on its design alone. The unique concept watch is not in production, and Future Now does not know of any similar watches using the layout conceived by Williamson.