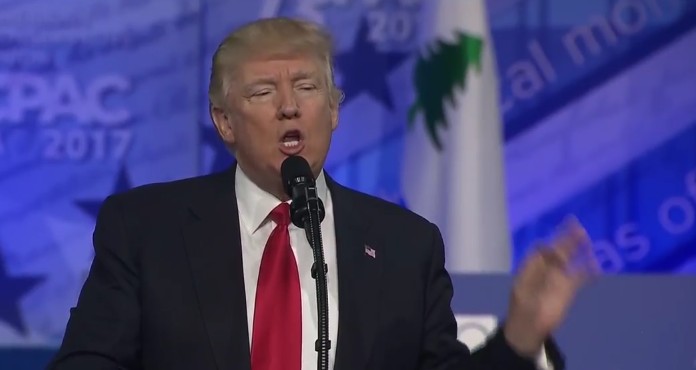 “They shouldn’t be allowed to use sources unless they use somebody’s name,” said Trump at CPAC, and several mainstream news organizations, including the New York Times, the LA Times, and CNN, were banned from a press briefing Friday.

Trump advisor Steve Bannon yesterday also spoke aggressively with regard to the media, saying, ““It’s going to get worse because [Trump is] going to continue to press his agenda, and as economic conditions get better and jobs get better, they’re going to fight. If you think they’re going to give the country back without a fight, you are sadly mistaken. Every day, every day is going to be a fight.”

The Associated Press and Time Magazine boycotted the press briefing in solidarity. Sally Buzbee of the Associated Press later told PBS NewsHour, “We felt today was different” from any other time in the past decades of their fight for access to the White House. “When there are news organizations that are being deliberately excluded, I think that’s different.”

She said that it was “really a struggle to get information about what the government is doing,” but that the AP would “do what they always do, which is … fight like mad to find out what is going on in terms of facts and … report that to the public. And we are going to do that every single day and we are not going to stop.

She told Judy Woodruff at PBS that they used unnamed sources when they knew the information was fact, not spin, and the person was in a position of authority to speak on the subject, and the information could not be printed otherwise, although they always tried to get sources to agree to use their names as a “gold standard.”

The move by Trump caused some to raise the issue of Americans’ constitutionally protected right to a free press.