Julian Assange has been holed up in a room in London for years after being given refuge by Equador in their London embassy building. In 2010, he was charged with sex crimes in Sweden — a couple of women he was involved with at the time made complaints not long after Wikileaks published video and other documents of American military activities in the Middle East — and Assange fled to England. British courts in 2012 ruled Assange should be given up to Sweden, and Assange violated his bail to flee to the embassy.

He has lived indoors since then, only making public appearances from a balcony or via the internet.

The case has been repeatedly reviewed by Swedish courts, and now they have found that in the interests of proportionality it is not worth continuing. Essentially, authorities made the decision because all legal options had been exhausted and because the prosecutor wasn’t working harder to pursue the matter.

The Swedish public prosecutor wrote in a statement, “In view of this, and that to continue with legal proceedings would require Julian Assange’s personal appearance in court, there is no longer any reason to continue with the investigation.”

The validity of the charges have always been questioned. There have been claims the charges were politically motivated because the U.S. government was very upset with the recent leaks.

The women in question are ones who each met Assange at conferences he was a speaker at and had consensual sex. Later on, the two women discussed Assange, and afterwards laid charges for forms of non-consensual sex (alleged to have happened in addition to the consensual sex). One of the charges was molestation, one was for unlawful coercion, and one was rape, according to Swedish law (the alleged acts had to do with not wearing condoms although the woman said he must and sex while the partner was sleeping). Originally, Swedish prosecutors didn’t think there was evidence of rape and that the molestation charge would still go forward but it wasn’t serious enough for a warrant. The lawyer for the 2 women made an appeal to a special department and after police interviewed Assange, the director of prosecution reopened the case for rape.

Over time, the molestation and unlawful coersion charge was dropped because Swedish authorities ran out of time to question Assange, and the UN found Assange was being arbitrarily detained and should be compensated for “deprivation of liberty.” The rape charge was the only one remaining until now, although Assange may still be found in contempt of court for violating his bail and fleeing.

British authorities have said Assange will be arrested if he leaves the embassy. The expectation is that he would then be extradited to the U.S. 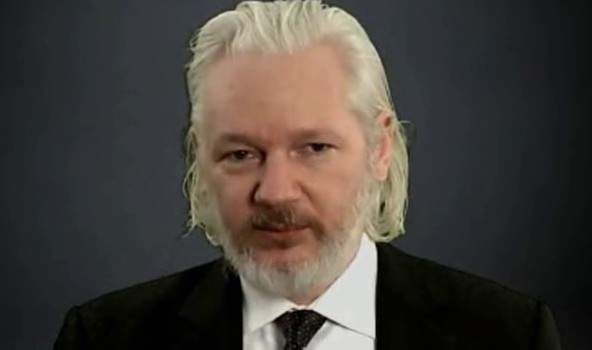 ISIS will be eliminated in about six months, Assange predicted, who blamed both Russia and Turkey for the jet downing last month

Wikileaks publisher Julian Assange spoke via live video stream on a panel on security and surveillance featuring terrorism expert Philip Giraldi, political activist Raymond McGovern, and strategic analyst Gregory Copley Thursday. At the end of the discussion, hosted by broadcast organization Russia Today, Assange commented on the recent developments in the Middle East. Assange criticized Russia for its action in the region, as well as its “severe incompetence” with regards to its jet being shot down by Turkey in November. He also made predictions about the end of ISIS as a significant power, and hinted at new information he had received about the last Turkish election and how it may relate to the jet incident.

“Northern Turkey can be looked at as ‘Novo Turkey,'” said Assange. “It’s a similar situation to which Russia was dealing with in the Ukraine.”

“And that if we imagine a situation where let’s say the United Kingdom came in and bombed rebels in eastern Ukraine in support of western Ukraine — Russian-backed rebels — what would the Russian response be? Would it be to shoot down those planes if it could find a technical excuse to do so?

“And I think the answer is ‘Yes,’ that the domestic nationalist imperative would be to do that.”

Assange continued to criticize Russian actions or lack of actions preceding the downing of its jet along the Turkish border.

“And Turkey send out many warnings. Sorry, it sent out several warnings to Russia in the preceding week.”

Assange began to speak of information relating to the last Turkish election, and that policy established at that time had a part in the jet’s being shot down.

“Now there is some other information that has arisen which what perhaps occurred was a plan that was set in train immediately before the election — the Turkish election, which Erdogan won. And that was a national imperative to win that election.

“I’m not sure what the result is but you can see that it’s quite a complex situation, that we don’t have time to go into, but Turkey has historical interest in northern Syria. It has also used the Kurds to create a form of nationalism in Turkey. It is going to continue to push to have various forms of control of at least northern Syria, and that’s a conflict with many different actors that I don’t see going anywhere nice. It’s impossible to satisfy all those actors at once.

Assange also made predictions about the impending end of ISIS as a significant power. ISIS would be “almost completely debilitated as a state” in about six months time, said Assange, and will return to being a guerilla group.

The U.S., Russia, Iran and other groups which had been militarily active against ISIS would then remain in the region, Assange believed, and continue other activities.