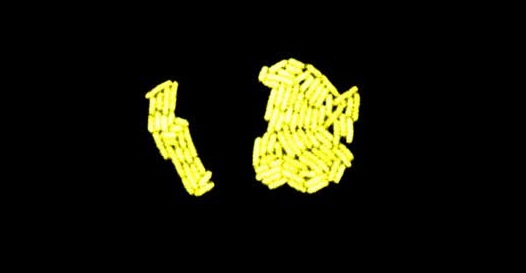 Many of the body’s processes follow a natural daily rhythm or so-called circadian clock, so there are certain times of the day when a person is most alert, when the heart is most efficient, and when the body prefers sleep. Even bacteria have a circadian clock, and in a December 10 Cell Reports study, researchers designed synthetic microbes to learn what drives this clock and how it might be manipulated.

“The answer seems to be especially simple: the clock proteins sense the metabolic activity in the cell,” says senior author Dr. Michael Rust, of the University of Chicago’s Institute for Genomics and Systems Biology.

“This is probably because cyanobacteria are naturally photosynthetic–they’re actually responsible for a large fraction of the photosynthesis in the ocean–and so whether the cell is energized or not is a good indication of whether it’s day or night,” he says. For photosynthetic bacteria, every night is a period of starvation, and it is likely that the circadian clock helps them grow during the day in order to prepare for nightfall.

To make their discovery, Rust and his colleagues had to separate metabolism from light exposure, and they did this by using a synthetic biology approach to make photosynthetic bacteria capable of living on sugar rather than sunlight.

“I was surprised that this actually worked–by genetically engineering just one sugar transporter, it was possible to give these bacteria a completely different lifestyle than the one they have had for hundreds of millions of years,” Rust says. The findings indicate that the cyanobacteria’s clock can synchronize to metabolism outside of the context of photosynthesis. “This suggests that in the future this system could be installed in microbes of our own design to carry out scheduled tasks,” he says.

In a related analogy, engineers who developed electrical circuits found that synchronizing each step of a computation to an internal clock made increasingly complicated tasks possible, ultimately leading to the computers we have today. “Perhaps in the future we’ll be able to use synthetic clocks in engineered microbes in a similar way,” Rust says.

Other researchers have shown that molecules involved in the mammalian circadian clock are also sensitive to metabolism, but our metabolism is not so closely tied to daylight as the cyanobacteria’s. Therefore, our bodies’ clocks evolved to also sense light and dark.

“This is presumably why, in mammals, there are specialized networks of neurons that receive light input from the retina and send timing signals to the rest of the body,” Rust explains. “So, for us it’s clearly a mixture of metabolic cues and light exposure that are important.”

The report, “Controlling the Cyanobacterial Clock by Synthetically Rewiring Metabolism,” was published in Cell Reports.