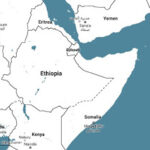 Somali pirates are active again in the waters off Somalia, according to the U.S. Secretary of Defense.