It’s capable of travelling over water, snow, sand and land, it can carry 10 people, and it has no problem with steep slopes and embankments … and it’s about to be unveiled at the Skolkovo Foundation’s Startup Village in Russia this week. … By the way, its very different from hovercraft, and it goes way faster (keep reading).

Who will end up buying these boats? Government agencies (for emergencies and surveillance), corporations (for transporting passengers and cargo to infrastructure sites such as oil and gas rigs in shallow waters), and individuals (for transport and recreation).

“They can be used for a whole variety of applications, including search and rescue operations, transportation of people and cargo, leisure, sports, fishing, monitoring of ports and surveillance,” according to the designers. 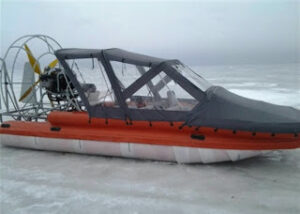 The Aeroboat was made as a joint Russia-India project, and was designed by IIAAT Holding. The St. Petersburg firm designed the Aeroboat in order to do what is currently impossible: Shallow water, dry patches, and marine plant-life in marshy or flooded areas pose a problem for traditional boats and other vehicles, and nevermind that terrain sometimes changes drawstically with the seasons.

So how is it different from hovercraft?

Besides being more robust, cheaper to maintain and fuel, the company explained, “Hovercrafts work on static air-cushion, whereas Aeroboats work on dynamic air-cushion. This feature gives Aeroboats a huge advantage in terms of speed and maneuverability.

“While hovercrafts on average move at around 45-50 kmh, Aeroboats are capable of going at around 150 kmh and even more on water, These speed levels are critical, especially during search and rescue operations, where sometimes every minute of swiftness can result in saving lives, as well as frequency in transportation of both passengers and cargo.”

Other interesting things about the Aeroboat: IIAAT developed nanomaterial-based anti-friction technology for the engine and selected mechanical parts, which greatly reduces friction and energy losses. The Aeroboat comes with either a standard gas or a hybrid gas-electric engine for increased efficiency and reduced pollution. 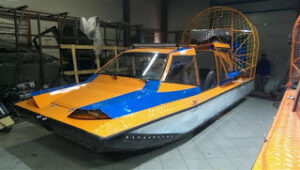 “Additionally, we are equipping our Aeroboats with [Internet of Things] technology, which allows us to remotely monitor and control/diagnose the equipment, as well as troubleshoot selected faults,” commented Sukrit Sharan, a senior board member of IIAAT. IIAAT is working with InfoWatch Group (Russian cybersecurity) in order to ensure its IoT tech stays secure.

India has already bought 25 units, and 5 have been delivered, and its expected the Aeroboats will be used in India’s vast regions of rivers and canals, which are sometimes dry land, sometimes monsoon flood. A similar but different use is predicted for Russia, where there is also government interest, because parts of the country with rivers and canals that are sometimes frozen, and so boats can’t transport year-round.

And guess what? They’re already working on a new version: an electric-only one Aeroboat with tandem wings.

During a rollover, side airbags and seatbelts may not work properly due to a defect in the truck’s software so far blamed for one death.

Fiat Chrysler said the recall covered 1m vehicles in the United States and 300k trucks in Canada, Mexico and elsewhere.

The company recently recalled 1.4m Jeep, Dodge, and Chrysler vehicles due to infotainment (remote) hacking. The new recall is a different problem, and doesn’t have to do with remote hacking, according to Fiat Chrysler.