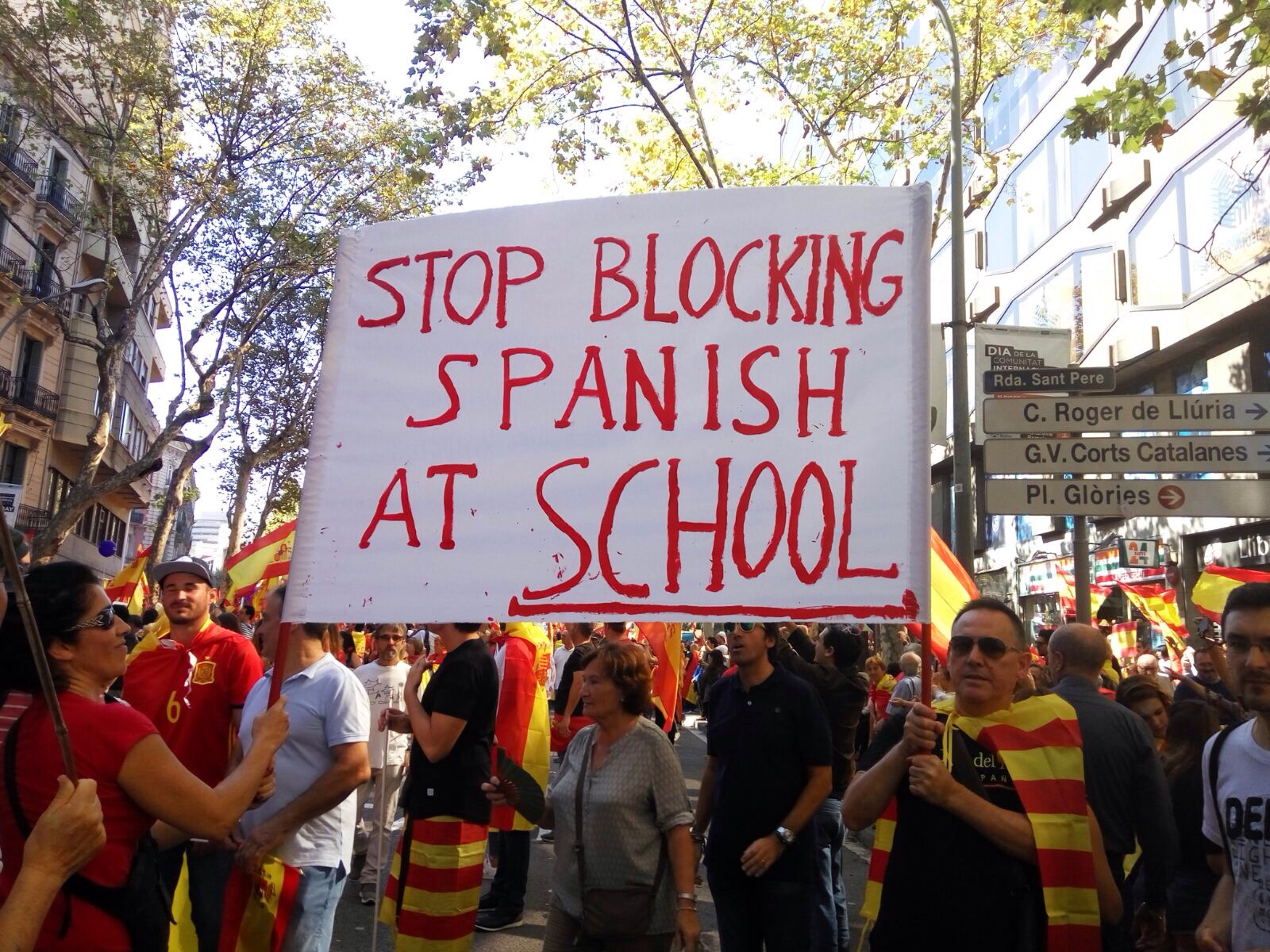 As many as 950,000 people have descended upon Barcelona Sunday, from all over Spain to protest Catalonia’s bid for Independence and to support the continued unification of the Spain with cries of “Long live Spain, long live Catalonia.”

Josep Borrell a speaker in the rally, a Catalan and Ex-president of the European Parliament spoke out against Carles Puigdemont, leader of the separatist movement and asked him “Not to throw this country off the cliff.”

From the beginning when the illegal referendum began on the 1st of October, a propaganda war between Catalonia and Spain ensued, and it was clear from the outset that Catalonia was winning, the victory handed to them by the Spanish state that deployed more than 4000 of the Spanish Civil guard and Police across the province looking to close down polling booths. 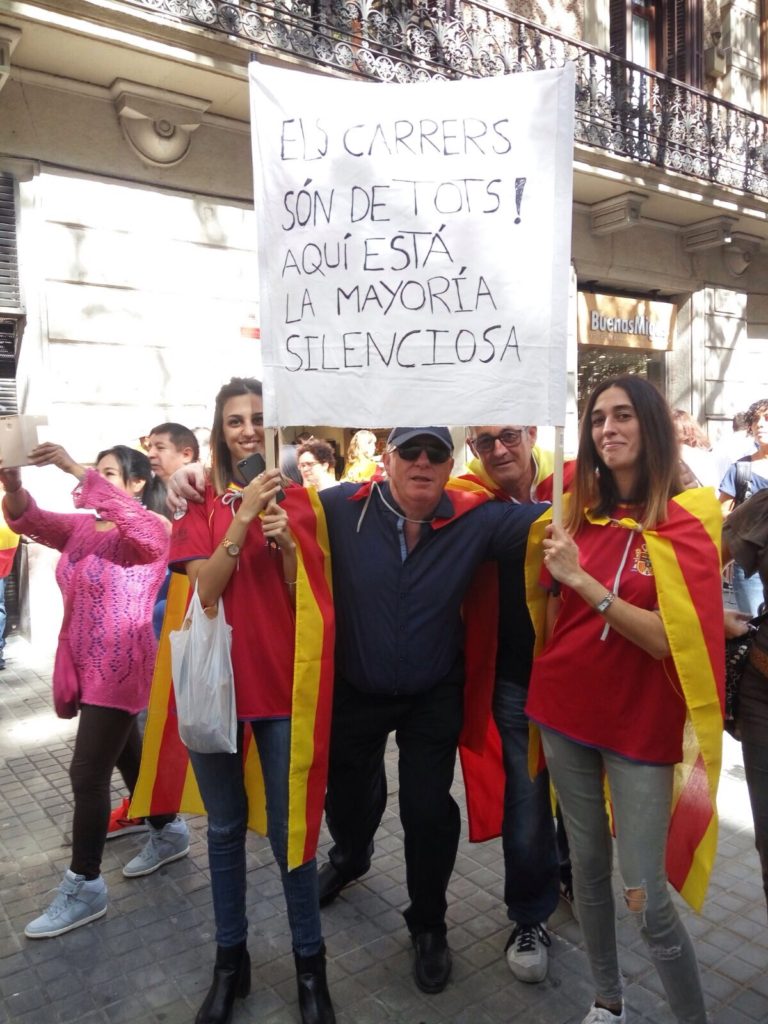 The photographs of armed Police firing rubber bullets and brutally mistreating protestors flashed across the globe, garnering international support from such newspapers as The Guardian who openly supports Catalonia´s right to self-determination. Julian Assange has put his weight behind the cause from day one, calling the Spanish response “Very serious repression by European standards.” He has gone so far as to compare Spain with China in the way it has dealt with the situation.

The independence referendum was intended to be etched in the minds of the Catalans as the day Catalonia defied Spain, harking back to the war of the reapers and the Catalan uprising of 1640. It was to be a day of revolution and an official long-awaited divorce from Spain, like a bad marriage that has run its course. The outcome had been predicted by a test vote from November 2014 that the voting would produce a positive result for the Catalan government and that independence would be declared within 48 hours of the last vote being made.

A week has passed since the vote on the 1st of October and no independence has been declared yet.

The Catalan government has been seen to be stalling with rumors of infighting between the various independence parties and no real long-term implementation strategy for any kind of self-governance.

To add to this the Spanish government is refusing to enter into any talks regarding Independence. The interior minister Juan Ignacio Zoido Called the vote “Nothing more than a spectacle.”

2.3 Million people voted on the 1st of October, many of those people voted 3 or 4 times, regardless of the presence of international mediators there was little control or organization. Only 42% of the Catalan population turned out to vote. Some were excluded, including a large foreign population and migrants from the rest of Spain. Others refused to vote and others simply were too worried to leave the house, knowing full well that things were going to get ugly at the polls. This 58% have become the majority without a voice, caught between two polarized Political opposites, heavily invested in their own agenda. 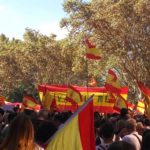 Since the vote, this silent majority without a voice has begun fractioning, some have come out in support of Spain and the unity of the state, some have joined the independence movement; unhappy with the way the Spanish state handled the referendum. Others have looked to the middle ground and “Hablamos” (Let’s talk) a movement which has opted for white flags, believing in a truce and dialogue between Catalonia and Spain with the tagline. “We are better than our leaders, let’s talk.”

Meanwhile, the Catalan parliament stalls, banks, and large conglomerates are leaving the province in droves. Banco Sabadell, Spain’s fifth largest banking group has moved its headquarters to Alicante, Biotech firm Oryzon Genomics has said it will be moving to Madrid. Its shares have surged 29% since then.

In turn, hotels owned by pro-independence supporters have asked any Police or Civil Guards stationed under their roof to leave.

As a result an audio recording went viral regarding a phone call to the Police in Madrid by a concerned citizen of Barcelona offering beds for the night and thanking the police for their help has led to an overwhelming surge in support to the Police, the caller saying in an emotional and tearful phone call that she felt alone and forgotten by the Spanish state. As a consequence Pro-Spanish support has begun to rise, something which was somewhat lacking during the voting. During the lead up to the referendum, the streets in Barcelona were filled with the independence flag, the “Estelada” (based on the flag of Cuba,) flying from balconies. Spanish flags have now also begun to appear in support of the continued unity of Spain. The King of Spain in a televised interview said that the people of Barcelona who believed in unity were not alone.

However the events in Catalonia continue to play out, a large proportion of the population is feeling insecure with the way their future is being decided for them.