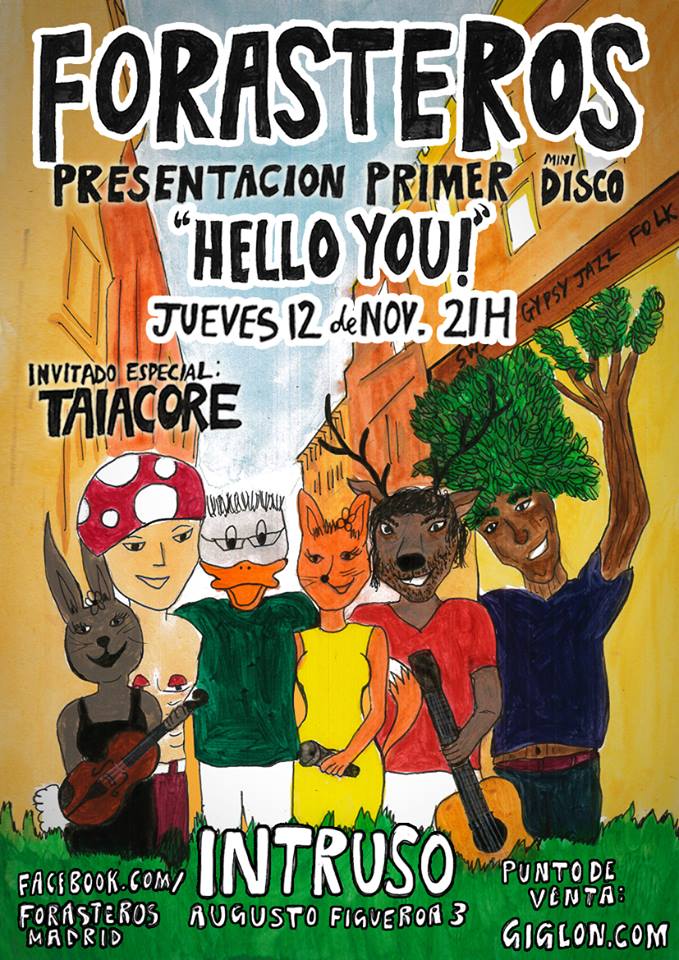 The Parque del Buen Retiro is home to the imperial statues of a lost Madrid and the heaving throngs of the present day Spanish capital, from the puppeteers to the balladeers, this great oxygen bank has opened its gates in much same way that they city has opened its metaphorical ones – to people from all over world with different tongues, stories, and different reasons for living in and loving Madrid. Enter Forasteros, an exciting musical group. International? Check. A fusion of styles and themes? Check. Not only that, they are talented musicians that know how to put on a show. I get to know the band in the lush environs of the park, while teenagers try to impress each other in the background, while families amble with their kids, while couples lounge lazily, and while tourists wear out the shutters on their cameras. All of whom, by the way, assemble around the band when the play music at the end of the interview. Told you they were good.

Forasteros are comprised of six people, representing London, Cardiff (Wales), Kochi (Japan), Madrid and Matamoros (México). They loosely combine elements of folk, rock, pop and swing, with sprinklings of gypsy-jazz. Their international profile has spawned songs in English, Spanish, French and even Japanese, and they often translate their lyrics. Not only are the songs a menagerie of linguistic cues and nods, the members of the group bring different skills and interests to the table – Tom (guitar) is a jazz enthusiast; Hinata (bass) loves punk and experimenting with electronic music; Ricardo (clarinet) has a classical bent; Julia (violin) recently organised the live music for a swing and tango queer event in El Vaciador; Tara (vocalist) loves making people laugh, or even just herself; Fernando (drums) previously played in a Celtic folk band. They released their first EP Hello You! (available on Bandcamp and SoundCloud) last November, which they recorded at The Treehouse Madrid Studios.

It is little wonder that the band describe themselves as “culturally and musically diverse”. I ask if it is difficult to organize the band, but Tara and Hinata emphasize that proceedings have a democratic makeup, and everyone kind of ‘acts as a leader’. These guys are not afraid to push the boat out and are always experimenting (“as long as it sounds good, anything goes”, says Tara). The band also plays in different formations (Forasteros dúo/ trio) at smaller venues and jams.

Tara, the Welsh member of the group, informs me that this “is the best moment for Forasteros”. Most of the band, who all have full time jobs, have lived in Madrid for nearly 5 years – they all share a love of the city, whether it be for the people, the lifestyle, or for the plethora of musical opportunities on offer. Tara underscores this last point by recounting all the open mics, jam sessions and workshops that exist in Madrid.

It is always obvious when a band enjoy playing together, and a band needs that internal positivity before they can transmit something to a crowd and make them feel something. This groups of musicians share beers as well as notes when they rehearse, while they also have big rehearsal sessions where they have sleepovers, spending the weekend working and hanging out (they’re off to Valencia in Semana Santa). The bond they have built between them shines through in the interview, a bond that their audience appreciates. Hinata speaks about “making people happy” and Tara chips in by saying that it’s wonderful to see people humming or dancing to a Forasteros song and feel “connected” with the rest of the group. This special moment of kinship can arise when she looks at her bandmates as they share a stage or when she encounters fans, as happened at a recent baby shower. Fernando’s youngest son is an avid listener of Forasteros, guaranteeing that they will have a fan base amongst the new generation. The stories woven around the songs on stage afford the crowd at their concerts the special privilege of seeing the forces that influence the band. 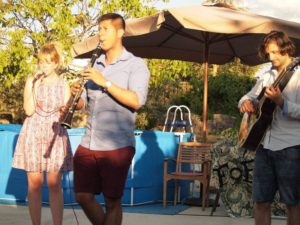 Songs to get your mind tapping and your heart dancing

Aside from having songs in many languages, their art touches upon social issues and psychology. Ser Anónimo (“Anonymous”, on the EP) is about the situation of homeless people in Madrid. Mindfulness Meditation is pretty self-explanatory and reflects Tara’s interest in mental health. While Hinata, a sociology student, loves “playing with reality” and likes binding logic into the internal language of a song. Hinata sums it all up rather aptly, “the band is reflecting reality, and we have 6 people’s reality“.

My favourite Forasteros song is On the Banks of June, a song shining with evocative lyrics and dripping with a wickedly ironic personality that calls in mind the panache of Duke Special and the murderous romanticism of Nick Cave, though this band has its own incomparable, unique voice.

I remember two things from the end of the interview, disappointment at it being over and the sound of applause from the congregation of accidental listeners who could not pull themselves away from the tunes of the rather splendid Forasteros. To see more of them, they often do gigs around Madrid – in places such as La Tortuga, Taberna Alabanda, Collage Drinks Arts, Gato Verde, La Tabacalera, El Republik – and are soon looking to tour around Spain. They are active on Facebook, Bandcamp, SoundCloud and YouTube. The band, having released their EP Hello You! in El Intruso last year, are currently working on their forthcoming single. They recently recorded two videos with audiovisual collective Calle Sonora, to be released soon. They’ll be playing in Ambulante Perro Bar (Lavapiés) on Sunday 10th April (free entry), Mercado de San Fernando (Lavapiés, TBC) and Alive Music Bar (Sol) on Saturday 28th May.

So, as a self-appointed music reviewer, I give their songs 5 stars for the charm and delightfulness and 5 stars to people in the band for, well, the same reasons. They have a loyal fan base that they are ‘very appreciative of’ but they want become even bigger. It won’t be long before they blow up, and in the meantime Forasteros have a new fan – me.