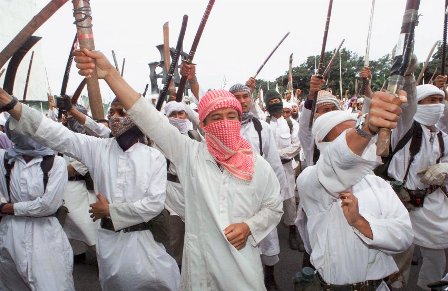 The number of Islamist attacks since 2001 when the World Trade Center’s twin towers collapsed has reached 25,000, according to terrorist watch group The Religion of Peace. The attacks currently occur regularly at a rate of over 200 per month around the world, so that the time at which the 25,000 mark would be reached was able to be predicted by TROP.

In January, Islamist terrorists committed 266 jihad attacks in 28 countries, including 43 suicide attacks. These attacks resulted in 2,998 deaths and 2,261 injured, not counting deaths and injuries that occured after the time the reports were published.

The numbers were almost the same over the past several months, so that when in early January The Speaker asked the editor of TROP, Glen Roberts, about the date at which the number would reach 25,000, he was able to predict that it would occur in February.

“It looks like there have been only 12 days since the beginning of 2005 without at least one Islamic attack,” said Roberts.

The TROP editor, who has maintained a record of Islamist attacks since the 9/11 attacks on the World Trade Center in 2001, noted that the number of attacks is the only figure they calculate. They do not calculate the number of people killed by Islamists, which would be many times higher than the 25,000 figure. The 25,000 does not include regular killings by Muslims such as honor killings, murders, or executions, but measures only killings deemed by TROP’s editors to have been motivated by the perpetrators’ interpretation of religious duty.

Roberts also told us that the rate of attacks since 2001 should in no way be considered an increase in such attacks.

“The rate at which people died from Islamic violence was probably much greater prior to this,” said Roberts. “There was less attention focused on terror campaigns in places like Algeria and East Timor, for example, even though the loss of life was staggering. Another example is Bangladesh, where several million people lost their lives in the early 1970’s during independence, a great many of whom were Hindu.”

According to TROP, Islam is unique among the world’s biggest religions in that killing is widespread and continues regularly. Roberts believes that the killing has to do with the scripture and history of the Islam.

“The people who know Muhammad best – his companions – were extremely prolific in waging war against non-threatening populations under the rationale that Islam is meant to be supreme,” Roberts told us. “There is nothing in the Quran that discourages this. In fact, verse 9:29 says that Christians and Jews are to be killed if they resist subjugation. Verse 9:123 tells Muslims to ‘fight those of the unbelievers who are near to you and let them find in you hardness.’”

These comments are for " Islamic terrorists have committed 25,000 separate violent acts worldwide that resulted in hundreds of thousands of deaths in last 15 years "

3 thoughts on “Islamic terrorists have committed 25,000 separate violent acts worldwide that resulted in hundreds of thousands of deaths in last 15 years”