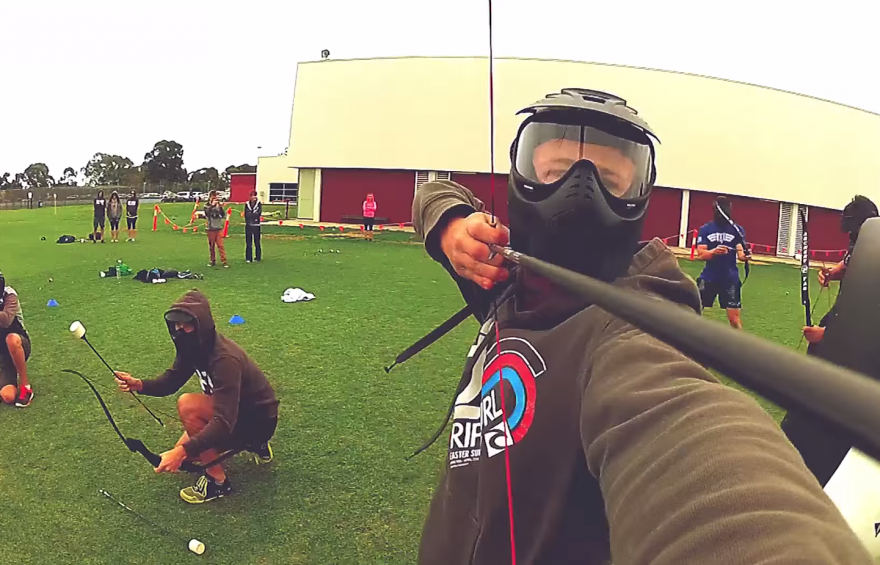 Humphreys and his wife Paula-Lee are already active travelling around their region of New Zealand, promoting the sport and their company NZ Bow Sports Ltd. Local businesses now sell archery tag equipment, archery-tag themed parties are held, and holiday programmes include the sport as an entertainment option.

Archery tag spread to the Australian continent from the US a couple of years ago, and currently the growing sport has over 350 licences in 34 countries.

With four six-minute quarters, players can be exhausted at the end of an intense match, which starts when a whistle blows and the five players on each side rush to the safe zone between the two sides to grab their arrows, then rush back and begin the engagement.

Players aim for each other and for the five-disk targets. If a player is hit anywhere except the head, or if his arrow is caught mid-air, he is out of the game, and if all players on a team are knocked out the team loses.

However, players can be brought back into the game by their team members when those team members catch an arrow mid-flight or hit one of their opponents’ five disks.

Players are required to wear a protective helmet at all times, and the arrows are foam-tipped.

Unlike paintball, to which archery tag has been compared, the game is family friendly — it doesn’t hurt when you get hit anymore than getting hit by a tennis ball hurts, according to Humphreys.