ABC’s reality robot battle show BattleBots, which first hit the air in 2000, will be returning to “BattleBox” it out again.

The seventh season premiere will be aired by ABC in a 8/7 Central Time slot, starting June 23.

The robot makers have already entered their bots in a pre-season competition to decide which bots would make it into the BattleBots season 2 series.

From the early matches, many of the old robot weapons will be seen again this summer, such as rotating saws, swinging hammers, and flame throwers. However, the new robot weapons have also been described as “explosive” by commenters present at the event.

An important consideration is that the robot targets of these weapons are metal and electronics based — other robots — rather than the targets of many other weapons being developed — people.

The robot battles are not just matters of which robot has the best weapons, according to robot builders. Tactics and strategy are also important in winning a match. The battles are round-robins, so robots must be able to continue battling in future rounds to win the prize.

For the upcoming season, BattleBot matches will again be 2-minutes long, followed by a review of the match with commentary by the judges, who determine the winner. 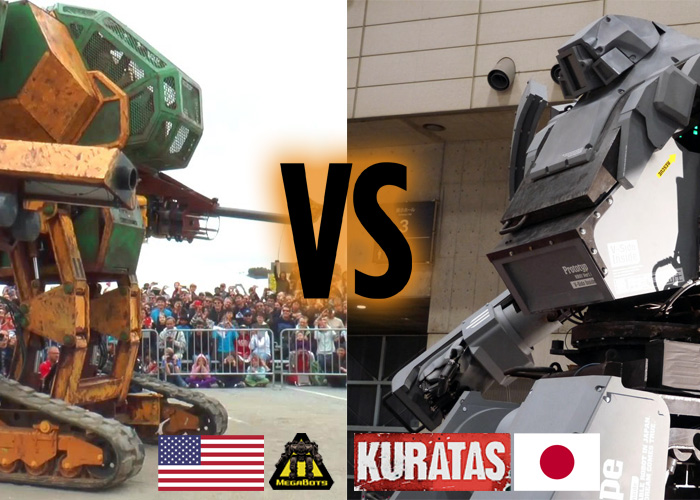 A battle between the giant humanoid robots of America and Japan is in the works, as MegaBot USA’s challenge to Japan’s Kuratas Mecha has been formally accepted.

Kuratas, the only giant humanoid robot manufacturer besides MegaBot, is set to meet the US bot suit sometime next year. Both bots will be equipped with paintball guns and will be piloted by teams made up of engineers of the rivaling nations.

“Prepare yourselves, and name the battlefield. In one year, we fight.”

Kuratas thanked the American team for their challenge, and specified a desire to engage in hand-to-hand battle: “But you know, we really need… MELEE COMBAT! If we’re gonna win this, I want them to punch them to scrap and knock them down them down to do it.”