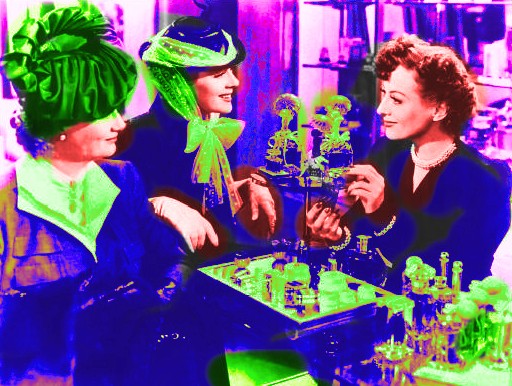 A recent study by Dutch design aesthetics researchers has discovered that women closely guard their fragrance identity to the point that they will keep it secret from the entire world if they can — so secret that even their friends cannot copy their personal scent, and they certainly won’t buy perfumes they like for their friends.

“The question here is not only: how do you express you identity? But it is: what types of items can someone else buy for you?” Dr. Rick Schifferstein of Delf University of Technology in the Netherlands told The Speaker. Schifferstein and his team were studying what effects packaging has on fragrance purchase when they made the somewhat unexpected discovery.

“Everyone expresses their identity through their appearance and their actions,” he explained. “Apparently, your identity  is not only expressed through the way you dress or your haircut, but also by the fragrance you wear.

Women won’t buy perfumes for each other, the team found, unless they don’t like the scent themselves, or when they may have previously liked the scent but no longer have a purpose for it. Actually, the researchers found, women tend to “sabotage” their friends when they give this type of gift. Women will buy a scent they like for themselves or their boyfriend — which is something women like to do, the findings showed — but will only buy scents they dislike for their female friends.

“While women hold fragrances as personally intimate and respect other women’s intimate choices, they happily want to influence what fragrances men wear,” Dr Bryan Howell, co-author of the study, said. “Assuming it is for a spouse or boyfriend, they want to pick fragrances they also like since they’ll be around that person often.”

The issue is more complicated than a simple concept of “sabotage” though, according to the researchers, and has to do with the importance of personal identity. Schifferstein explained some of the complexity of the issue by referring to the gift motivations, concerns and preferences of women.

“Giving someone a fragrance might suggest that they need one because they smell bad. This could cause unwanted questions to occur between friends. Women prefer to avoid that possibility and look for a gift that is safer to share.”

“Fragrance categories — for example, fruity, spicy, citrus, floral — may play an important role in this process: Some women identified themselves as belonging to a certain category and they would consider purchasing only fragrances from this category for themselves. Consequently, they would not recommend these fragrances for their female best friends.”

The gifts women choose for each other tend to be purchased with a strong motivation to play it safe: “The more intimate the item, the less likely it will be considered appropriate as a gift.” Gifts such as CDs, books, and flowers tend to suit this less intimate, more safe approach, Schifferstein told us.

The report, “Using color–odor correspondences for fragrance packaging design” was completed by Bryan F. Howell and Hendrik N.J. Schifferstein, and was published on Science Direct.