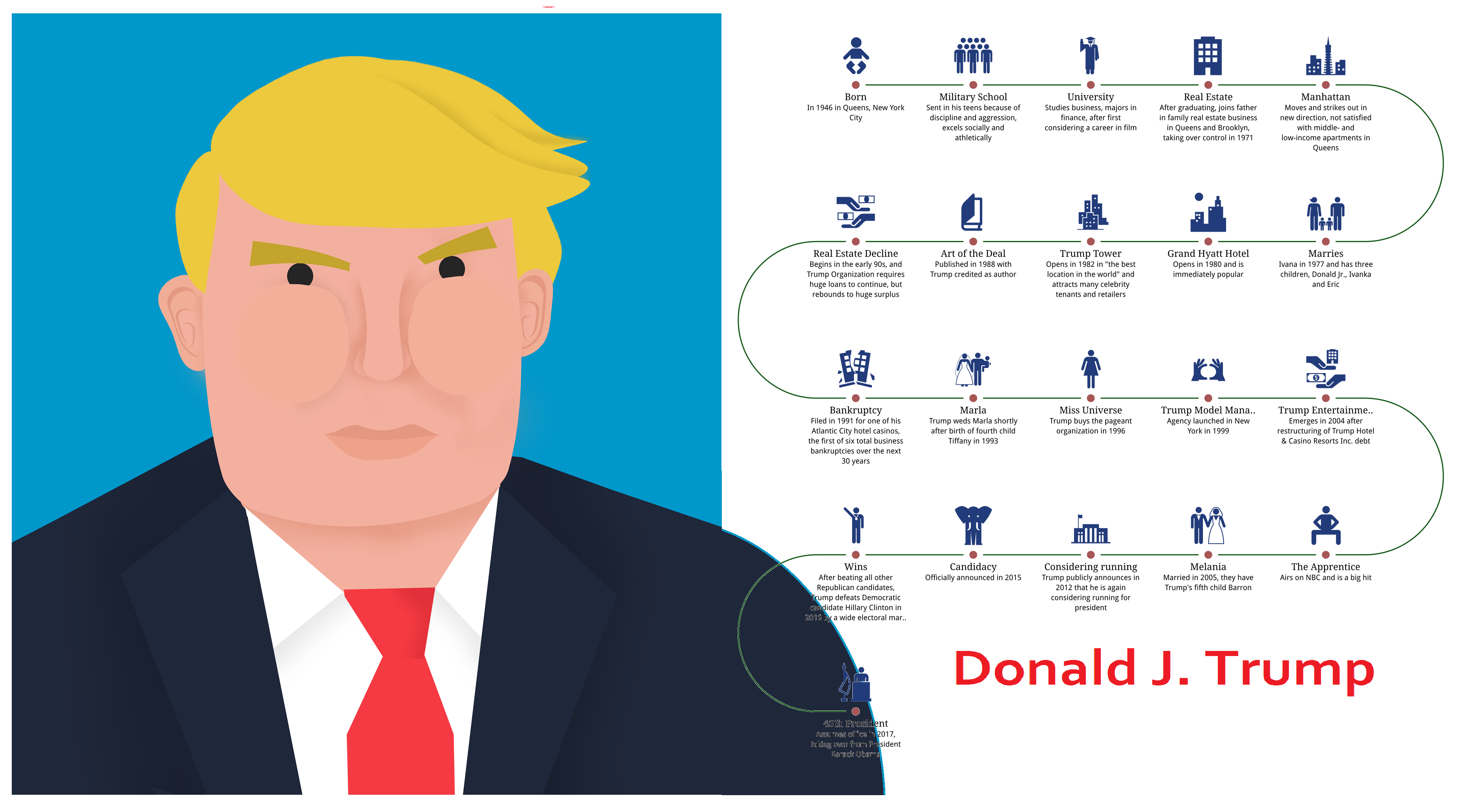 1946 – Donald John Trump was born on June 14 in Queens to New York City real estate developer and builder Fred Trump and his wife Mary, the fourth of five siblings.

1959 – Sent to New York Military Academy because he needed discipline he wasn’t getting at regular school. Trump did well there socially, academically and athletically, and graduated in 1964.

“My father said, ‘You know, you need a little discipline. You’re sort of tough to handle.’ And they sent me up to a military academy. New York Military Academy, where we had some really tough people working up there, and you know, I was supposed to be a very smart person but I was on the aggressive side, and they were terrific. … It was a good place and it was a tough place and I ended up graduating at the highest rank, so I acclimated. … By the time I was there five years, I learned a lot about leadership and I learned a lot about a lot of things.”

Trump excelled as an athlete in this period.

“I always was somebody that loved sports, And I always did well at sports, and I loved baseball in particular [he was captain of the team]. I was on the football team, and I was on the wrestling team — not a great wrestler, Not a great basketball player, I had bad jumping ability. I just was not able to get up there. But I was a very good baseball player.”

At this time, Trump had an idea of going into film as a career.

“I actually applied to USC, where they had a great school of cinema — they said that was like ‘the Wharton School of Cinema.’ And I applied, and what happened was … there was a man who was having troubles in real estate, and he came to me — smart guy — and he said to me, ‘Could you help me?’ and I was only 19 years old, and I gave him a lot of advice, and this guy was a top Broadway producer, and I said to him, ‘You know, I’d love to go to USC,’ and all this stuff. I kept talking about movies. And he said, ‘I tell you what. You just saved my life. You really know real estate. You gotta be crazy to go into show business.’ And it really affected me. And I went in with my father.”

1966 – Trump transfers from Fordham to the Wharton School of Finance at University of Pennsylvania, graduating in 1968 with a degree in economics. He was deferred for military service in Vietnam, first for education, then on 1-Y* after graduation.

“I majored in finance, and I liked finance, but I did well, and I loved the Wharton School of Finance and I always thought it was a great school.”

Trump joined his father in real estate development at Elizabeth Trump & Son. He convinced his father to be more liberal with loans based on Trump apartment complexes and they expanded their holdings. He was not satisfied with relatively small profit margins to be had in the competitive middle-income apartment market, which the company built using federal subsidies (the 236 Program, Section 8, etc.).

1971 – Trump was given control of company (later renamed Trump Organization), and of his own initiative he struck out in a new direction: Manhattan. Trump moved there and began making important social connections.

“Being in Brooklyn and Queens, and we’d look across the East River, and I’d see those big tall buildings. I’d say, ‘Pop, that’s what I wanna do. I wanna build those buildings. I wanna be there. I love it. I gotta be there.’ And he sorta said, ‘That’s not our territory.’ You know, like a lot of fathers would say. He said, ‘You don’t know anything about that. That’s not our territory. Let’s stay in Brooklyn.’”

1973 – The federal government filed a complaint against Trump’d company, alleging they discriminated against tenants based on race, which was settled two years later with an agreement in which Trump would train employees about fair housing practices. Trump won the local lawsuits that were leveled against him making the same claim.

1974 – Trump obtained an option on an unprofitable but well-located hotel which later became the Grand Hyatt Manhattan.

1977 – Trump married Ivana and had three children, Donald Jr., Ivanka, and Eric. The couple lasted until 1992, ending over an extra-marital affair that resulted in a child with actress Marla Maples.

1978 – A Trump property, bought when it entered bankruptcy and undeveloped because of the poor prospects of making money from it, was promoted by Trump as a city convention center location and it eventually beat out two other contenders for selection.

1980 – Trump opened the instantly-popular Grand Hyatt Manhattan, which made him New York’s best-known developer, after working out deals with the hotel corporation and the city, financing, and complete renovation.

“I started with the Grand Hyatt Hotel. … I put in almost no money. … It was owned by the Penn Central Railroad, and it was run by some very good people. … I made deals with [the people there] and took options to the building. I then went to the city, because the city was really in deep trouble. I was about 28 years old. And I said, ‘Look, you’re going to have to give me tax abatement, otherwise this thing’s never going to happen. Then I want to Hyatt, I said, ‘You guys put up all the money and I’ll try and get the approvals,’ and I got all the approvals, and Hyatt put up the money, and we built the hotel. We were 50-50 partners. And it became very successful. Then I did the Convention Center and lots of other jobs.”

1982 – Trump opened Trump Tower, a luxurious $200 million apartment-retail complex which attracted celebrity retailers and tenants, which also received positive reviews for its architectural design. The building was leased in 1979, and it brought Trump further national attention when it opened. Trump lived in the top three floors until he moved into the White House in 2017.

“It was a public company, and they were fighting like cats and dogs … and I was reading about it … and I saw the trouble that they were having, and I knew they owned Bonwit Teller department store. So I called the head of Genesco and I went to Nashville, Tennessee. I took an option to buy the site, and what happened was as soon as that option was announced, every developer in the world went there trying to buy it, because even then it was the best site. You know, 57th and 5th next to Tiffany is the best site. But it was too late because I already had it signed.”

At this time, Trump also began to make money in air rights.

1985 – Trump bought Mar-a-Lago estate in Palm Beach, Florida, for about $8 million, which is today worth in excess of $100 million, and turned it into the Mar-a-Lago Resort. He first bought the beach in front of the estate from a sick friend.

“I overpaid for the beach. I payed $2 million for it. But that was the whole beach in front of Mar-a-Lago.” And then I announced I was going to build the ugliest building. It was just going to be a long … it was just going to take all the views, because I didn’t want anyone to buy Mar-a-Lago. It was embarrassing. I put this thing with no windows, no nothing, just a wall so you couldn’t see the ocean. … And then people — Ross Perot, Al Taldman, many, many people — wanted to buy Mar-a-Lago, but they said, ‘We have to have the beach.’ So people came and they offered me a fortune for the beach and I said, ‘No, no, no.’ And then I forgot about it. And then a couple of years later I got a call, and they said, ‘We’d like to sell you Mar-a-Lago.’ And I said, ‘What’s your price?’ And they said, ‘We want 8 million dollars.’ They wanted in the 30’s, and now they wanted 8. … I didn’t negotiate. I said, ‘I’ll take it.’ And I turned it into a club. And it’s an amazing club.”

1987 – “The Art of the Deal” was published with Random House (authored by Donald Trump and Tony Schwartz), the first of several books that bear his name.

1988 – Trump made his first appearance at Wrestlemania IV. Trump participated in the wrestling world occasionally over next two decades.

Trump turned down an opportunity to buy the New England Patriots, a team now worth $2 billion.

1990 – The real estate market began to decline, reducing the value of Trump’s income and holdings.

“I call it the depression, because for a lot of people it’s been very bad.”

“I’ve been through great, great times, but I’ve also had to fight like crazy to keep everything going.”

Trump won the Razzie Award for worst supporting actor for his role in “Ghosts Can’t Do It,” in which he played himself.

1991 – The company filed for bankruptcy for one of his Atlantic City hotel casinos, of which he has bought and developed many over the past decade. In total, six bankruptcies over the next 30 years would be filed after debt accruals for various properties, although three of these bankruptcies were for the same building,

“The crazy thing about Atlantic City: I was there during the boom time, when it was a monopoly, and did phenomenally in Atlantic City, but then Atlantic City changed. A lot of bad decisions. They built a convention center in the wrong location. I fought like Hell that they wouldn’t do this. They didn’t do the airport properly. The politicians took over Atlantic City and absolutely destroyed it. But Atlantic City for me has been a great experience. And I got out seven years ago [said in 2014]. And made a lot of money, but I do play the bankruptcy laws. Not individually, but corporately. And other people do to. … I use it as a business tool.”

1992 – Eastern Air Lines Shuttle, purchased in 1989 and renamed Trump Shuttle, didn’t see profits and Trump defaulted on loans, with the enterprise ending after a merger.

“The market had totally crashed. But the banks came to me and people came to me, and I made a great deal where it was a great deal to sell the shuttle, even in bad times.”

1993 – Trump had his fourth child, Tiffany, with Marla Maples, who he married. The marriage lasted until 1997.

1999 – Trump announced the formation of an exploratory committee for possibly entering the 2000 presidential race for the Reform Party, but withdrew his candidacy later on.

Trump Model Management agency in New York was launched, with which Melania was associated as a model before their relationship.

2004 – Trump and hit TV show “The Apprentice” garnered widespread attention and ratings for NBC, where Trump had become a joint-partner. The show later spawned “The Celebrity Apprentice.”

2005 – Trump married Melania after a year of engagement and had a son, Barron, his fifth and youngest child.

2012 – Trump stated publicly that he was again considering running for president, but it did not carry forth.

2015 – Trump announced his candidacy for the presidency on the Republican ticket, and his political statements regarding immigration and other matters caused controversy, including NBC severing business ties with Trump, although they continued the popular TV show “The Celebrity Apprentice.” Other large organizations that withdrew from associating with Trump include the Professional Golfers Association of America and Macy’s.

* 1-Y – Registrant qualified for service only in time of war or national emergency.
Note: The 1-Y classification was abolished December 10, 1971. Local boards were subsequently instructed to reclassify all 1-Y registrants by administrative action.