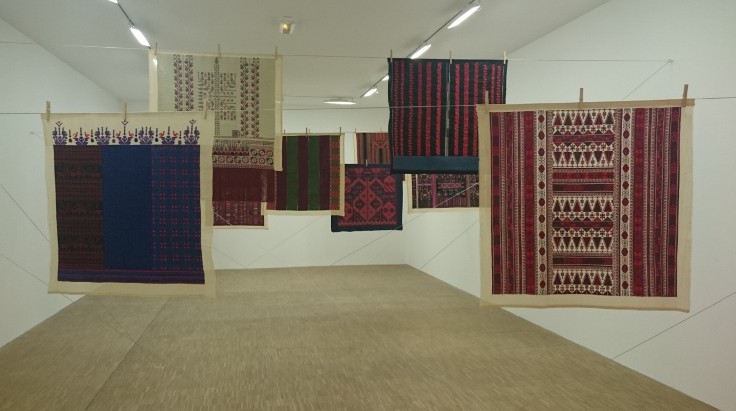 Born in Beirut in 1952, Mona Hatoum is of Palestinian descent and British nationality. This latest exhibition of an unprecedented scale has gathered over 100 works of this leading contemporary artist in various media, ranging from performance, video, photography, works on paper to installation and sculpture. Some of the must-sees are highlighted for you here to spend more time experiencing and understanding them.

Hatoum’s artistic practice often features modifying or scaling up familiar objects from daily life into threatening or hostile sculptures up to human proportions. This cold and solid room divider was based on a foldout cheese grater and now aggressively blocking the view of visitor across the exhibition room. If standing close enough, one may even have the feeling of going to be peeled.

This installation made up of piling square wire mesh lockers gives an illustration of animal cages. It also reminds of stacked and uniform architecture not unfamiliar to large cities. Thanks to up and down movements of the simple household lightbulb hanging in the centre, the walls of the dedicated exhibition room was showered with enchanting shadow patterns while the moving shadows give visitors swaying feelings as though they are on a boat sailing in the sea. 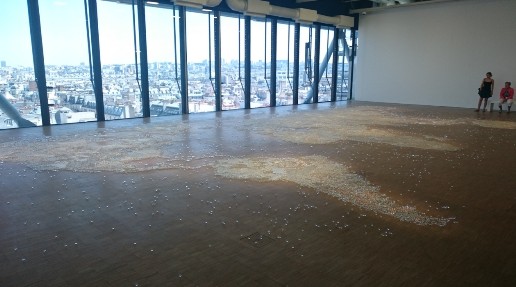 Definitely no one would have missed this large world map consist of numerous glass marbles lying on the floor in front of the view of Paris city. All the marbles of this amazing piece are not fixed to the floor, infusing a sense of instability and vulnerability as movements of viewers may possibly shift parts of it or even destroy it. It also creates an unwelcoming surface to pass or walk on. Map is also a recurrent theme of Hatoum’s works, quite some other works with this theme can be found in the exhibition too.

This beautiful installation of twelve pieces of Palestinian embroidery hanging in a room by steel cables may not be the most attention-seeking. However, its subtle beauty originates from the artist’s determination to preserve the traditional skill of Palestinian needlework which is endangered by exile and dispersion of Palestinians all over the region. Each ‘window’ symbolises a key region of Palestine. 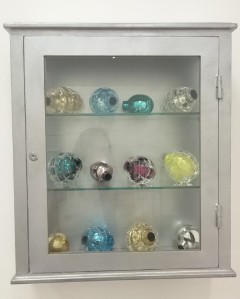 Those seemingly appealing objects exhibited in a medical cabinet are actually in the forms of hand grenades in colourful glass. They are presented as precious objects to be aesthetically appreciated by viewers. However, they are marked with malevolent undertone at the same time. Thinking of the series of Medicine Cabinets by Damien Hirst, this is slightly more visually alluring and underscored by stronger tensions.

There are absolutely much more to see and experience at this exhibition. The wide range of works actually enables us to understand the significance of the artist’s works in today’s art world and to appreciate the diversity and versatility of Mona Hatoum’s artistic practice. 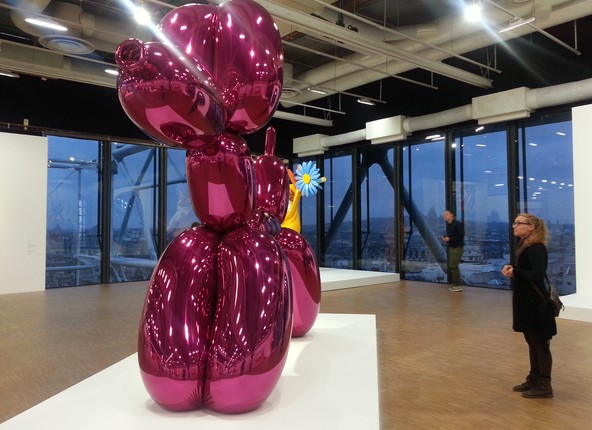 After having been exhibited in New York City, “Jeff Koons: A Retrospective” is now in the Centre Pompidou in Paris until April 27, 2015. Jeff Koons is one of the most controversial contemporary artists. This retrospective, with Scott Rothkopf as exhibition curator and Bernard Blistène as curator of the Paris show, comprehensively presents Koons’ work at various stages of his 35-year career. Located in the influential contemporary art institution in Paris, alongside Atelier Brancusi and the remarkable retrospective of Marcel Duchamp, could Koons’ exhibition and artworks live up to the high expectations?

Rabbit and the Inflatables

Koons’ initial inflatable work, “Inflatable Flower and Bunny,” displayed at the entrance of the exhibition was echoed by the silvery “Rabbit” one third of the way in. The two share similar forms, but the features of the plastic toy disappeared in “Rabbit’s” smooth and reflective surface. “Rabbit” was described in the caption next to the artwork as “one of Jeff Koons’ most iconic works,” — although such importance is not signified with any special treatment of its display in the exhibition. On the other hand, it recalls Bracusi’s refined shiny bird sculpture, “Leda” (1926), which was created decades before the Koons work. While the former’s perfect surface relates to the infinite and indefinable, Koons’ subject matter does not depart far from popular culture and Pop Art aesthetics, despite the change of materials.

Not far from the rather subtle “Rabbit” stands the attention-seeking “Ballon Dog.” A magenta version of the 3-meter orange painted stainless steel “Balloon Dog” sold for $58.4 million last year, a record price for a living artist. This oversized “Balloon Dog” is placed in the center of the exhibition section of the “Celebration” series, surrounded by the large blue “Moon” and red “Hanging Heart.” However, there does not seem to be any dialogue among the works except for reflecting one another from their surfaces. From “Rabbit” to “Balloon Dog” — both iconic — the link is obviously Koons’ gesture of “exaggerating the aura of cheap, ordinary things, aggrandising them into works of art in increasingly expensive materials.” These point us to the ready-mades of Duchamp. While Duchamp’s “Fountain” was an act of anti-market and anti-authorship, Koons has diverted to commodification of art in capitalist art market.

This latest series of Koons’ in the last part of the exhibition shows classical sculptures replicated in plaster, each with a sharp blue balloon-like sphere. The classical beauty of the sculptures is placed against representation of American popular culture by the modern blue mirror balls which come from suburban ornaments in his home state of Pennsylvania. Koons is trying to address the future decorative nature of artworks. The plain and dull texture of the plaster is contrasted by the shiny reflective gazing balls which catch viewers into the artwork. However, when one searches to find something deeper out of such contract and reflection, one can still only find the externalized image of oneself. There is then a sense of narcissism, not something surprising from Koons’ art. David Zwirner, the art dealer for Koons, quoted Koons saying that, “If you’re critical, you’re already out of the game.” One critique replied to this, “His narcissism makes him incapable of self-editing.” Indeed, it seems not obvious how the choice of each sculpture model could give either a different message or a higher artistic value, except for the selling of one more piece of decoration. In this sense, it might be painful to claim them as descendants from Duchamp’s ready-mades in which the act of choosing and the choice of the objects is the notion.

Viewing these three major iconic series from Jeff Koons three and a half decades of work, the progression of time does not generate any greater surprise or insights from Koons’ works. The New Yorker’s Peter Schjeldahl, reviewing the Whitney show, called Koons “the signal artist of today’s world,” claiming that, “If you don’t like that, take it up with the world.” In this regard of generalizing and externalizing his artworks to the responsibility of the contemporary world, it might seem that if one is disappointed by the exhibition, such disappointment should be directed to the wider world. However, it is doubtful that this is the case when we just turn our eyes to Duchamp or Brancusi next door, whose art is still giving much profound meaning to our world besides money and market. 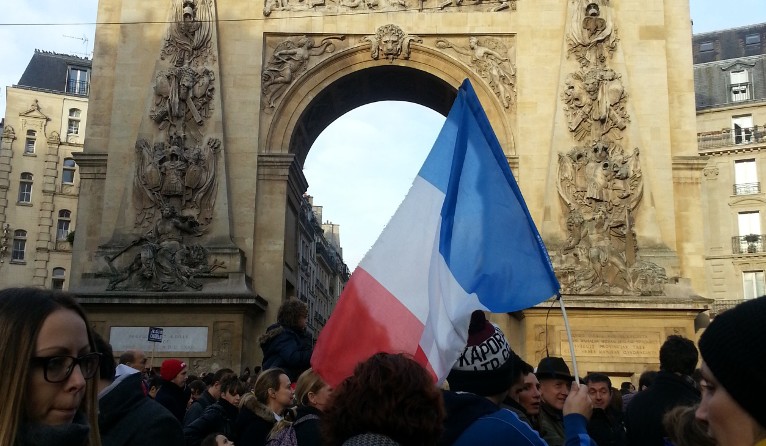 PARIS – This is the first Sunday after the terrorist shootings in Paris. The French government decided to launch a large-scale solidarity rally to show support for the victims of the extremist attacks.

However, one may wonder whether it would be safe to go into with a large crowd. Would it also become the target of terrorist attack?

According to a Parisian with whom this reporter spoke about such concerns, there were a large number of police and even police snipers, and the government had a large-scale mobilization plan in place.

Also, she thought the terrorists would not be interested in attacking the rally because massive murder did not match the ‘signature’ such terrorists have become known for.

She went on to say that we shouldn’t be afraid because that’s exactly what the terrorists wanted, while she also understood that would be easier said than done.

She might not have represented all French people but at least she revealed the thoughts of some French people–to be even braver when facing threats! After all, the historic, massive mobilization throughout the country has been consistent with this mentality.

In the afternoon, I set off from a metro station where the platform was full of people. Five trains passed but I couldn’t get on train at all. One Parisian told me in a text message that he had never experienced such a large crowd before, and expressed that it seemed incredible to him. He could not even reach the place where we were supposed to meet because some roads had been blocked.

I was finally able to board the sixth train that came, but it was extremely crowded. When I got off, a herd of people were moving slowly towards the exit. Since there were so many people, what usually takes around two to three minutes–reaching the exit–took almost 20 minutes.

Then I found myself already standing in the crowd once I reached street level. I walked in an opposite direction of the crowd hoping to find a space so that I could call my friend. However, the phone network did not work at all.

I was standing next to a bus stop at a crossroad while watching the people marching slowly across. There were people of different ages and various races. Many were holding signs with the slogan, “Je suis Charlie,” while some were holding French national flags. Some people also specially decorated their hats with coloured pencils to represent the cartoonists. One lady was wearing a hair clip prettily handcrafted with a row of colourful colour pencils.

The rally was very peaceful. Most of the time, people were just marching forward quietly. There was not much shouting of various slogans. No one used amplifiers. From time to time, the crowd would clap in rhythm and shout, “Charlie! Charlie!” or, “Liberté! Liberté!” On both sides of the marching crowd were those typical Parisian buildings. Some people up there went out to their balconies to cheer for the crowd. Some tried to lead the crowd to clap. Some were playing music to cheer the marching people. Suddenly, there came that most touching eternal classic:

“Imagine all the people
Sharing all the world…

“You may say I’m a dreamer
But I’m not the only one.
I hope someday you’ll join us,
And the world will live as one” –Imagine, John Lennon

I couldn’t help singing along, and I could hear some people around were singing together too. People clapped after the song was over.