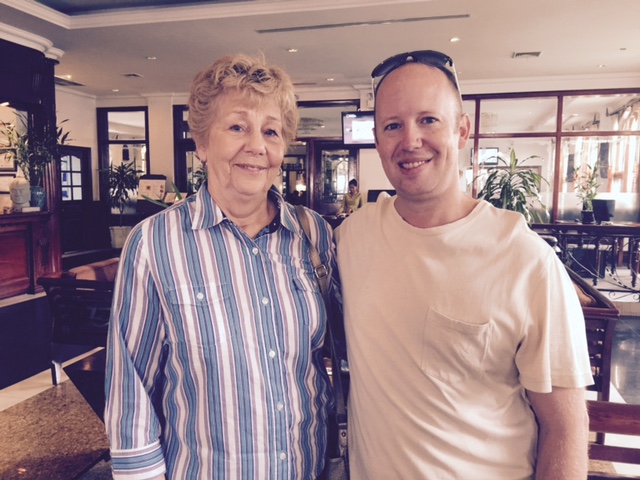 SIEM REAP, Cambodia — Last month, a group from Methodist churches in the United States traveled to Cambodia as part of an outreach program targeting females, mainly in the countryside. Their main goals were to share the Gospel of Jesus Christ and to provide additional  education that is otherwise mostly out of the reach of rural Cambodians. The group was assisted in their project by a local translator.

One of the members of the delegation, Nancy Yarbourgh from Virginia, had previously been to Cambodia in 2013 along with three other members. “The group is the Virginia Conference United Methodist Volunteers in Mission. The goal of this team was to gather women together for fellowship and training,” explained Yarbourgh.

Upon arrival in Phnom Penh, Nancy and her group stayed for two days in the capital. After that, they went to the southern city and province of Sihanoukville. “We arrived [in Sihanoukville] on Monday and left on Saturday. Then we went to Siem Reap for two days and [then went] back to Phnom Penh.” During their trip, they stayed mainly in countryside villages outside of these cities.

Nancy went on to say that there are many more churches in this predominantly Buddhist country than may be expected. “The United Methodist church currently has 154 churches in Cambodia. I know there are Baptist and non-denominational churches as well. All of the Methodist churches are in rural villages. We are also building dormitories for the children to stay in so they can get an education. We have many Methodist schools in Cambodia, and we are also building a women’s center.”

Nancy stated that although Cambodia is 95 percent Buddhist, the people in the country have been very receptive to the message of the Gospel. “It has not been that difficult to bring Cambodians to Christ. They are very excited about this loving, living God we share with them. The people of Cambodia are very open and anxious to hear the gospel and share it with others.”

Although the primary focus of the group was to share their faith with the villagers, they also concentrated on educating people in many different areas that are especially relevant to this part of the world. “We trained in areas of leadership, human trafficking, roles of the women in church, community and society. … We also had classes on the environment and green initiatives.”

Nancy said that human empathy and mutual understanding helped the most while they were working in the countryside. “Our greatest success was teaching the women and letting them know that we are just like them. We [also] have problems, illness and heartache.”

She also said that although the time they had in Cambodia was short, they got a lot accomplished, and she was optimistic that in the future the United Methodist Volunteers in Mission would continue to make a positive impact on rural Cambodians. “We wanted to do so much more but most of our time was spent teaching the women, which was the focus of our group. I think [that with] time and the continued support of the many Conferences in the United States, [we] will make a difference in the lives of the people of Cambodia. That is my prayer; to end poverty and get the children educated.”