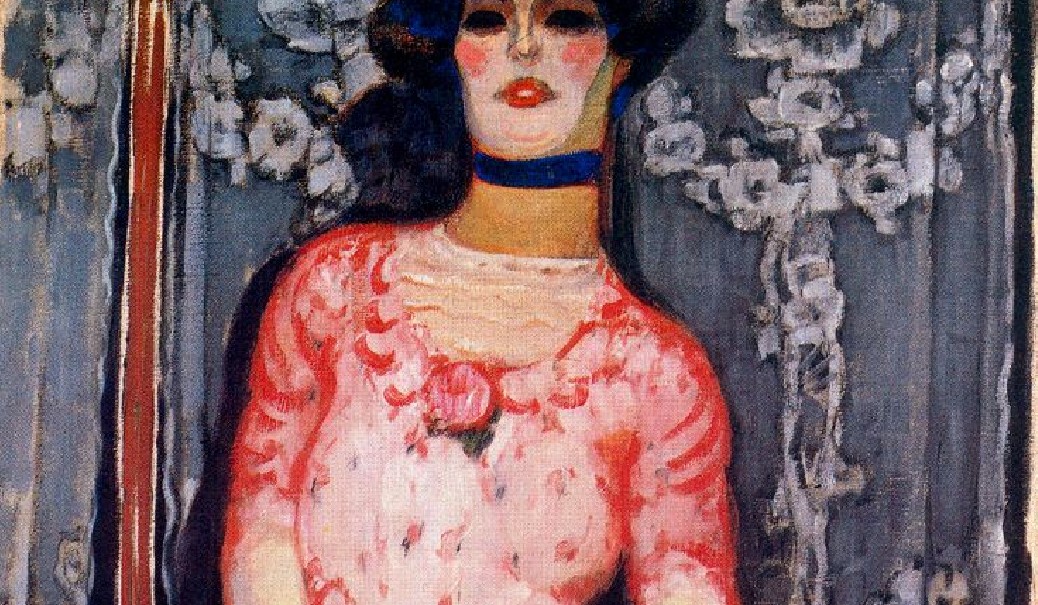 PARIS — Women of the night and their artistic impact is the subject of a major exhibition at the Musée d’Orsay in Paris. The show focuses on prostitution seen through the eyes of painters between 1850 and 1910. This extraordinary undertaking, whose title is borrowed from Honoré de Balzac’s controversial novel ‘Splendeurs et Misères des Courtisanes’ (The Splendours and Miseries of Courtesans), aims to unveil the faces and bodies of prostitutes as a genuine and rich source of inspiration for the painters of the period.

The mid-nineteenth century generated an effort to depict a concrete contemporary reality with a new desire to reject Romantic modes of idealization in art and literature which opened a new range of subject considered worthy of representation. The prostitute’s body as the ultimate anti-academic subject matter previously considered socially inappropriate could eventually be brought in the frame and became emblematic of the modernist gaze. Widely represented across canvas and texts, prostitutes became a symbol for modernity and embodied modern life itself.

From Van Gogh, Manet to Picasso or Munch, the exhibition features various generations of painters across several countries. As already suggested by its title, the exhibition also intends to examine the contradictory connotations of disgust and beauty associated with prostitution. Yet if some artists emphasized the ‘misery’ of it in their work while others chose instead to highlight its ‘splendour’, artists were all operating under the prism of fascination. Whether as cubists, impressionists, postimpressionists or expressionists, all were trying with a particular brush to reveal this disorienting world of the unseen sometimes lugubrious, sometimes colourful, no matter the technique of representation.

As they were experimenting and looking for new pictorial ways of representing prostitution, the subject was treated very differently depending on the painter’s artistic vision. Rather than reproducing scenes accurately and realistically, painters like Edgar Degas or Constantin Guys based their visions mainly on fantasies, suggesting and sublimating the noisy brothel atmosphere through unconventional techniques. Some chose to paint the common spaces of prostitution such as streets, harshly illuminated rooms or the dark interiors of ‘cafés-concerts’ and ‘music-halls’, while others preferred the intimate details of a face or a body.

Along with its artistic impact, the event also examines the social and cultural aspect of prostitution through Salon painting, decorative arts, sculpture and photography. In addition, various documentary and archival materials made available to the public highlight the ambivalent status of prostitutes from the splendour of the ‘demi-mondaine’, a pleasure girl living on her wealthy clients, to the misery of the ‘pierreuse’, an often clandestine street walker.

The social subject of prostitution is still a complex one nowadays. The fact that the Musée d’Orsay decided to conclude the year with a celebration of artistic images of prostitution has a particular resonance in light of the latest debates on the subject in France. We cannot but connect it to the recent decision of the French senate to scrap important sections of a government-backed law on prostitution that brought hundreds of prostitutes in the streets of Paris and other French cities last April. In spite of this resonance, whether taken as a subtle reminder of the still open debate on the controversial prostitution law in France or as a pure celebration of nineteenth century artistic imagery of prostitution, this impactful event is definitely not to miss. 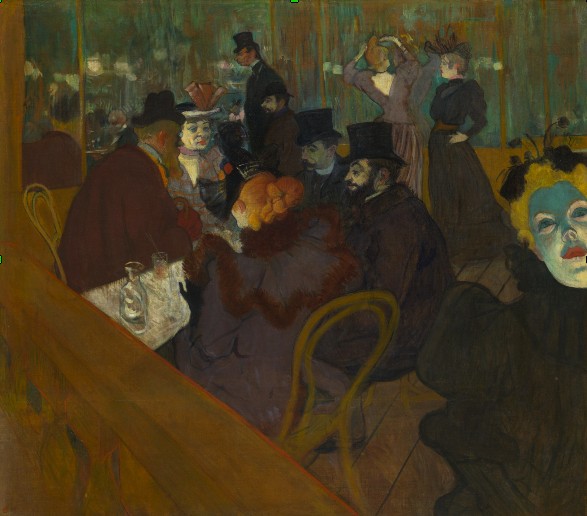 ‘At the Moulin Rouge’, 1892, Henri de Toulouse-Lautrec, The Art Institute of Chicago 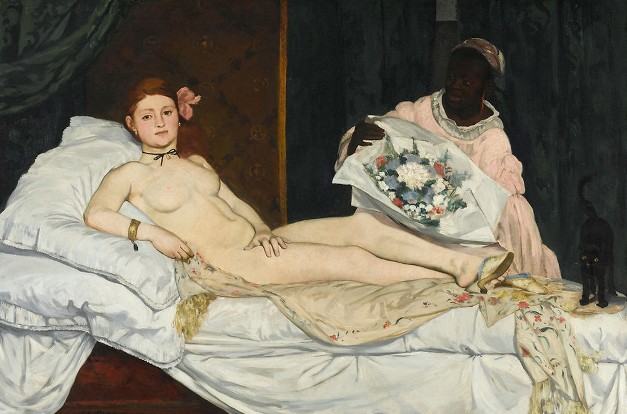 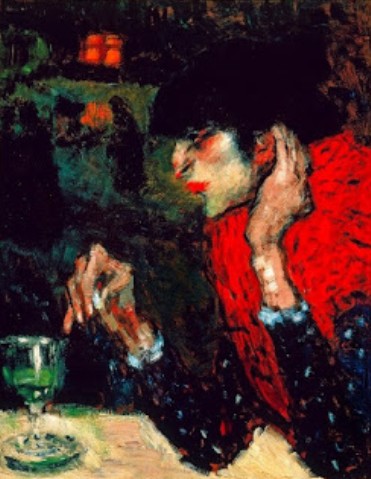 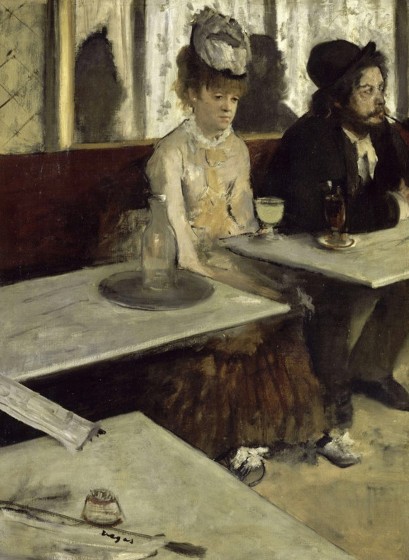 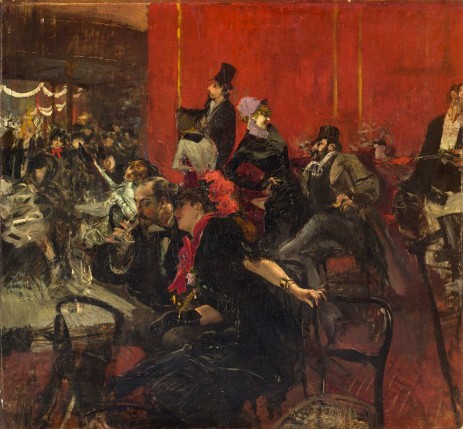 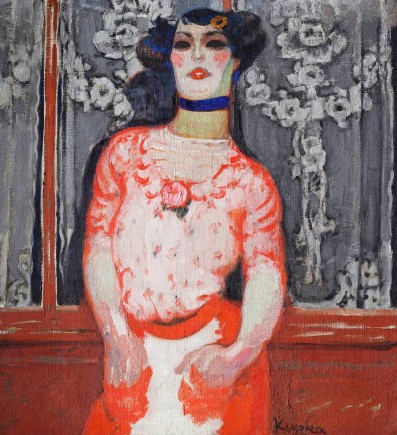 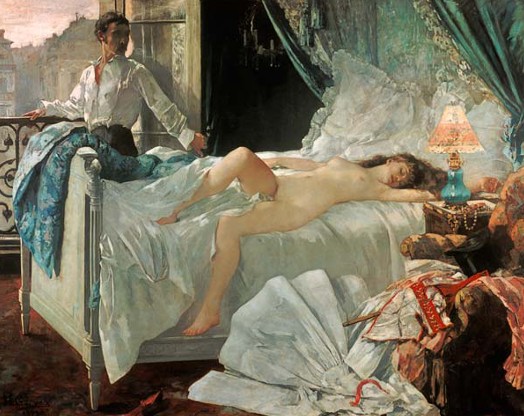 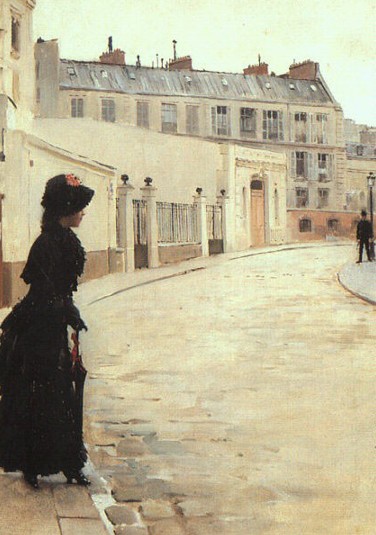 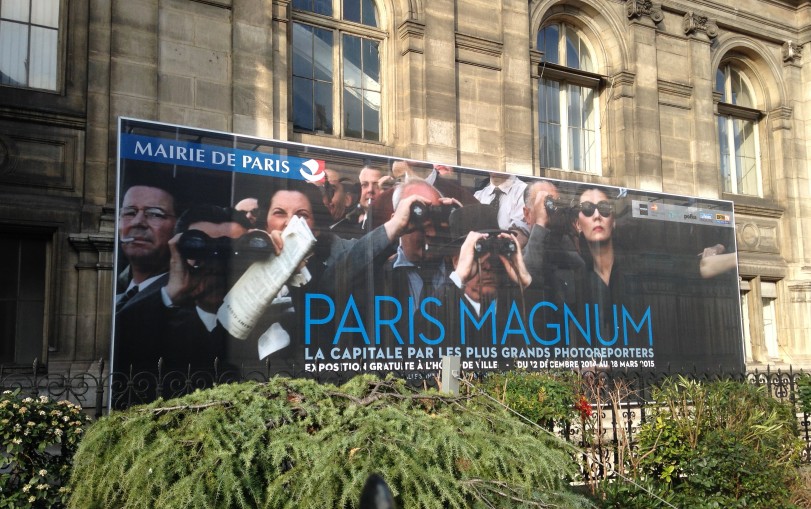 PARIS — One woman spectator gasps at a photo of what appears to be severed body parts being washed in a sink by a woman smiling gaily for the camera. When another woman passes the same photo, she reads the description and laughs aloud to herself, prompting the incredulous woman to lean in close to the small print to discover the dismembered body parts are actually sculptures at the Musée Grévin, captured on film in 1982 by Guy Le Querrec.

This winter, a series of 150 photographs at Hôtel de Ville captures the last 80 years in the City of Lights, from a light-hearted moment at one of Paris’s finest museums to the aftermath of World War II. The photographs are selections from Magnum Photos, an extremely exclusive photo journalism agency founded in 1947 in New York and Paris that began with four photographers, whose names are highly-esteemed in their field: Henri Cartier-Bresson, Robert Capa, George Rodger and David “Chim” Seymour.

The free exhibit is arranged in a long rectangle inside Hôtel de Ville and organized into five chronological sequences, beginning with 1932 – 1944 with photos taken by the agency’s founders before they established Magnum Photos. This era, dubbed by the exhibit as “Magnum Before Magnum” includes photos such an eerie shot of a man striding through watery streets at Place de l’Europe in 1932, as though Cartier-Bresson is capturing the fleeing peace in Paris before the war. Others from this time show poverty, as well as smiles, such as in a Seymour photograph from 1936 of two dozen construction workers taking a break to pose on the railing of a crane at Saint-Ouen.

“Poverty and Inquietude” depicts the era following the Second World War. The introduction to this sequence says, “Few smiles in these photos …”, yet some of the most whimsical pieces of the exhibit are pinned to this era, including the 1953 “Peintres de la Tour Eiffel” by Marc Riboud, capturing a force of jolly painters on their lunch break sitting atop their current worksite – The Eiffel Tower – with no rigs or ropes to save them from a lethal slip. Another Riboud photo of a small dog riding atop the back of a larger dog walking a tight-rope, much to the entertainment of bystanders, contradicts the “poverty and inquietude” in the other photographs of this sequence.

“Les Années Pop” (The Pop Years) spans from 1960 – 1969, described as the time of the mini skirt, the “Nouvelle Vague,” pop art, and, of course, the revolution of ’68. A Henri Cartier-Bresson photograph of the famous student occupation of The Sorbonne captures the spirit of revolution, lead primarily by Paris’ youth. Photos from the workers and students demonstrating at Place de la République in May 1968 spark a striking comparison to the recent historical solidarity march at the same place in Paris.

1970 – 1989 “Reaction and Philosophical Resistance,” is marked as “the antithesis of the epoch.” Two landmarks Paris is most known for today were constructed in this time – tucked between photos of when Patrice Chéreau, François Truffaut, Jean-Pierre Léaud, Coluche and Gainsbourg
were young and handsome” are photographs of the construction of the Grand Arch de la Défence and the pyramid at the Louvre

The final “epoch” is named “An Aesthetic of the Margins,” from 1990 to 2014, a reflection of the city today, although the city seems in some ways to have never changed at all. “Many of the photographs in this exhibit seem so familiar, like they were taken just yesterday, even if they’re from decades ago,” says Nina Zeijpveld, who lives in Paris, “but others showed me a side of Paris I never knew about.” These color photographs have a more familiar feeling for younger Paris inhabitants, such as a 2003 shot of people sitting among green neon lights at Nuit Blanche, or a shot of Champs-Élysées Christmas markets in 2005. Observers can see how photographers began to play with new effects, such as two separate photographs taken through a glass pane. “It gives the feeling of being in a dream,” Zeijpveld says. The section speaks of a growing difficulty for photojournalism with the abundance of televised news, but also of Magnum Photos artists’ dedication as they continue to delve into the city, capturing its slight waves and enormous breakers in ways fast-paced televised pictures could never do.

Slightly removed from these five sections of the exhibit are two more parts, along each far wall of the room. Along the right wall, projectors cast slideshows, separated by the building’s pillars – black and white photos of the Paris jazz scene include mostly the black community, which doesn’t seem to have as many faces in the rest of the exhibit, allowing a peek into yet another part of Paris’s past that inhabitants like Zijpveld may not have known much about.

The portrait wall is lined with photos almost all black and white and almost all recognizable – Pablo Picasso in his studio, photographed by Robert Capa in 1944. Simone de Beauvoir, Jean-Paul Sartre, Serge Gainsbourg, Francois Sagan in his apartment … The posed portraits give life to the subject’s era in a way the exhibit’s other photographs cannot. Edith Piaf’s shining eyes bring a personal perspective to the time, casting the observer into her life, into the Parisian atmosphere she experienced every day. As with any story, the story of these 150 photographs is told most personally through the faces of individuals, and the wall of portraits seals the room of Parisian history with a string of understanding times past.

Photography books, postcards and other souvenirs are on sale in front of the exhibition, which runs until March 28.